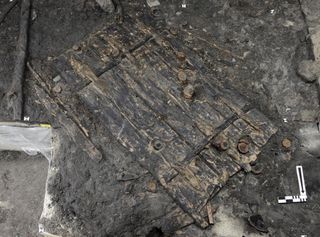 Archaeologists think they've spotted traces of social inequality in a 5,000-year-old village that was buried on the shores of Lake Zurich in Switzerland.

The prehistoric settlement was uncovered during the construction of an underground parking garage near the Parkhaus-Opéra in Zurich.

"When the construction started, we expected only minor archaeological remains if at all, but were suddenly confronted with the largest excavation with waterlogged preservation in the area for 30 years," Niels Bleicher, an archaeologist with the city of Zurich who led the excavation, told Live Science. [Photos: 4,000-Year-Old Artifacts Found in Swiss Alpine Pass]

During the Neolithic period and Bronze Age, people lived in pile dwellings (homes on stilts) along bodies of water in the Alps. Hundreds of these villages have been found across Europe. The waterlogged sites often have ideal conditions for the preservation of organic materials such as wood and textile, which typically don't survive in the archaeological record.

Over the course of nine months in 2010, about 60 workers dug at the site in Zurich, which covered an area nearly the size of two football fields. They found thousands of artifacts, from ceramic pots to wolf-tooth pendants to the wooden remains of walkways and houses that once stood on stilts over the marshy shores of the lake. They also found an astonishingly intact, 5,000-year-old wooden door that may be among the oldest in Europe.

In a new report published Oct. 26 in the journal Antiquity, Bleicher and his co-author describe how this village wasn't exactly a fixed place but something that shifted and moved over time.

"Every eight to 15 years or so, these settlements were abandoned and the house groups reorganized to form new settlements," Bleicher told Live Science. Between 3234 B.C. and 3060 B.C., the groups of houses tended to be arranged in quarters within a settlement.

"These were strictly organized with parallel houses in rows," Bleicher said. And the zones had some significant differences. For example, during one phase of the settlement, a zone the researchers labeled Sector A held the largest houses. Sector B did not contain any bear-fang pendants or high-status axes like the other zones did. Sector A and Sector B were also separated by a fence of thin poplar posts.

"We were very surprised to find that within one settlement, people built a fence to segregate themselves from the adjacent quarter," Bleicher said. "Such ostentatious social segregation is something nobody really expected in the late fourth millennium B.C."

The door was found inside a phase of the settlement that was used between 3176 B.C. and 3153 B.C.; Bleicher said its construction is impressive.

"It is important as a source of information on technical skills of Neolithic people, which are still often seen as some dumb brutes," Bleicher said. "I don't know many people today who could come up with such a wonderful technical solution to make a wooden door without planer, screw and nail or water-resistant glue."