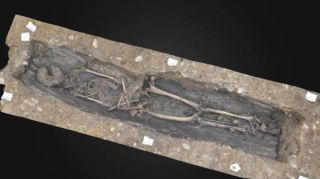 A 3D photogrammetry model of a human skeleton with coffin.
(Image: © © MOLA)

An ancient Anglo-Saxon cemetery with more than 80 rare wooden coffins containing skeletons has been unearthed in England.

Earlier this year, archaeologists were investigating the ground around a river in the village of Great Ryburgh in eastern England, ahead of the construction of a lake and flood defense system. During an excavation, they started finding graves arranged in rows.

"We had no idea it [the cemetery] was going to be there," James Fairclough, an archaeologist with the Museum of London Archaeology (MOLA), told Live Science. [See Photos of the Rare Wooden Coffins and Cemetery]

Based on broken pieces of pottery found in the dirt used to fill the graves, Fairclough and his colleagues determined that the cemetery dates back to the early Anglo-Saxon period, from about the seventh to ninth centuries A.D.

In the late sixth century A.D., St. Augustine was sent on a mission by the pope to convert the pagan Anglo-Saxon kings to Christianity and thus spread the religion throughout Britain. And this newly discovered cemetery appears to be Christian. The burials were arranged along an east-west grid and had no grave goods —two features that are typical of Christian cemeteries from that period, Fairclough said. The whole cemetery covers an area about 100 feet by 65 feet (30 by 20 meters), and the excavators also found the remains of a timber structure, likely a church or chapel.

Wood is biodegradable, so it often disappears in the archaeological record. Evidence for wooden coffins usually appears as a stain in the ground. But at this cemetery in Norfolk, thanks to some special environmental conditions, many of the wooden coffins remained intact.

Fairclough explained that the local water in the river close to the site runs over a lot of chalky rock, making it alkaline. And when that river water mixed with the more acidic sand where the cemetery is located, it created a neutral, waterlogged environment to preserve the coffins.

The archaeologists found 81 coffins made fromoak trees that had been split in two lengthwise and hollowed out. According to MOLA, these are the first dug-out coffins of this era to be excavated by archaeologists.

Six plank-lined graves, which were dug into the ground and lined with timber planks, were also found. These graves are thought to be the earliest known examples of their kind from Britain. The archaeologists said they haven't yet figured out the relationship between the two different burial types at this cemetery.

"These rare and exceptionally well-preserved graves are a significant discovery which will advance our understanding of Middle-Saxon religious beliefs and rural communities," Duncan Wilson, chief executive of Historic England, the organization that funded the excavation, said in a statement. "This cemetery has been revealed because, under the current system, archaeological surveys are required before work on a sensitive site starts. This site has immense potential for revealing the story of the community who once lived there."

Fairclough said further analysis of the skeletons could reveal more information about the individuals buried at the site, such as their gender, age and even family connections.