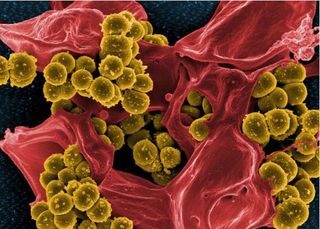 A scanning electron micrograph image of methicillin-resistant Staphylococcus aureus (MRSA) bacteria. MRSA can be a cause of "flesh-eating" bacterial infections.
(Image: © National Institute of Allergy and Infectious Diseases (NIAID))

What started as a simple bug bite on a young man's knee soon turned life-threatening when the itchy bump developed into an infection with "flesh-eating" bacteria, according to a new report of the case.

The 21-year-old man went to the emergency room after his right knee became swollen and painful, and he had trouble walking, according to the report, published in the November issue of the American Journal of Emergency Medicine. He told doctors that he had not injured his knee, but that he had gotten a bug bite there three days earlier.

"I was really surprised to see that this otherwise young and healthy guy could barely walk," said Dr. Jacqueline Paulis, an emergency-medicine physician at New York University School of Medicine, who treated the patient and is the lead author of the report. (Paulis treated the patient at a different New York City hospital before working at NYU.) [5 Weird Effects of Bug Bites]

An exam revealed that he had a bump on his knee that was discharging pus, and tissue in the area had started to die, or become necrotic. He also could not move his knee joint, which "raises a lot of red flags for doctors that there's something deeper going on," such as an infection, Paulis told Live Science. The patient also felt sharp pains in his chest when breathing, and he started having flu-like symptoms a day before arriving in the ER.

An X-ray of his knee showed that there was air underneath his skin tissue, which can be a sign of a "flesh-eating" bacterial infection, known medically as necrotizing fasciitis. (Air gets under the tissues because some species of bacteria that cause necrotizing fasciitis produce gas.)

Necrotizing fasciitis is a rare but serious infection of the tissue just under the skin, as well as connective tissue, that spreads quickly in the body and can result in the loss of limbs and even death.

There are several types of bacteria that can cause necrotizing fasciitis, including group A Streptococcus (group A strep), Klebsiella, Clostridium, Escherichia coli and Staphylococcus aureus, according to the Centers for Disease Control and Prevention (CDC). Most commonly, people get necrotizing fasciitis when the bacteria enter the body through breaks in the skin, including cuts and scrapes, burns and surgical wounds, the CDC says.

But bacteria may also enter the body through insect bites. If a person scratches a bite hard enough, they can break open the skin, allowing bacteria to enter, Paulis said.

However, when this happens, "usually our bodies and immune systems are healthy enough to contain that and mitigate it," Paulis said. In very rare cases, necrotizing fasciitis can develop, but this is usually seen in people with other risk factors for the disease, such as older age, diabetes or kidney disease.

Paulis said she doesn't know why the patient developed necrotizing fasciitis when he had no other risks factors for it. "He was the epitome of health, 21 and young," Paulis said. It was also unclear what type of insect bit the man, the report said. But the man's blood and wound site tested positive for the bacteria methicillin-resistant Staphylococcus aureus (MRSA), which caused his infection.

Tests also revealed that the man's infection had caused him to develop yet another rare complication — a "septic" pulmonary embolism. This is a clot containing bacteria that travels from the site of the infection to the lungs, where it blocks blood flow and causes abscesses.

Paulis said one reason she decided to publish the case was to make doctors aware that the combination of skin and lung symptoms could indicate an infection along with a septic pulmonary embolism — a rare disease combination that she has seen only a few times in her career. "I think we should have it on our radars as emergency physicians," Paulis said.

The man was treated with intravenous antibiotics and surgery to remove dead tissue in his infected knee. He recovered fully and was able to leave the hospital after a few weeks, Paulis said.