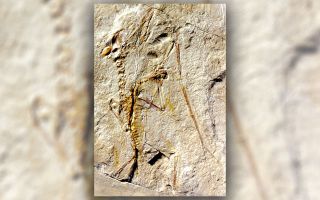 A recently hatched "flapling" Pterodactylus (skull at top, wing to right) died, perhaps on its maiden flight, and was buried in muds at the bottom of a lagoon 150 million years ago in what is now Bavaria, Germany. The specimen is now housed at the Natural History Museum in London.
(Image: © D.M. Unwin)

ALBUQUERQUE, N.M. — In a scientific ode to pterosaurs — the extraordinary, flying reptiles that lived during the dinosaur age — paleontologists have pieced together a biopic of sorts. It details what would happen to a pterosaur from the moment its egg was laid to its last dying breath.

This research is the culmination of decades of findings about these ancient flyers.

"Some amazing new finds, in China and Argentina, of eggs and embryos over the last 14 years have provided incredible insights into pterosaur reproduction and growth — something that we could never have predicted back in the 20th century," study lead researcher David Unwin, a reader in paleobiology at the University of Leicester in England, told Live Science. [Photos: Ancient Pterosaur Eggs & Fossils Uncovered in China]

Unwin presented the research, which has yet to be published in a peer-reviewed journal, here at the 78th annual Society of Vertebrate Paleontology meeting yesterday (Oct. 17).

Each pterosaurs' story began with its parents; its mother had paired oviducts (just like crocodilians, turtles, lizards and snakes), the tube the egg passes through, which allowed mama pterosaur to lay soft-shelled, oval-shaped, relatively small eggs. These eggs were then likely buried in the moist ground, where they wouldn't dry out.

"They incubated for probably a long time," Unwin told Live Science. Once the babies hatched, they had well-developed skeletons and flight membranes, as well as skeletal proportions that were similar to those of adult pterosaurs, indicating that the newborns could likely fly right away, he said.

This point, however, is contentious among scientists who study pterosaurs. Some researchers think that the hatchlings needed time to develop their flight muscles before taking to the skies.

It was likely difficult for pterosaur infants to walk on land, because all four of their limbs were connected to the wing membrane, said Edina Prondvai, a postdoctoral student of biology at Ghent University in Belgium, who wasn't involved with the research. "So, it must have been very important for them to fly off as soon as possible after hatching, because they had to find food [and] they had to avoid predators," she told Live Science.

Even so, some species of pterosaurs likely needed time to develop before flapping away, although some species may have completed this development sooner than others, Prondvai said.

As for whether mom and pop pterosaurs took care of their young, the jury is still out. "We have no evidence of parental care, which means they might have received parental care," but it's just not preserved in the fossil record, Unwin said.

Regarding pterosaur dinnertime, a new analysis of pterosaur teeth by Jordan Bestwick, a doctoral student of paleontology at the University of Leicester, shows that these beasts ate a medley of snacks. He looked at tooth wear from 13 pterosaur species and compared the wear marks to the chips and scratches on the teeth of modern reptiles. Bestwick found that different species chomped down on different meals, including both vertebrates, such as fish, and invertebrates, such as insects.

One pterosaur in particular, the Jurassic-age, 150-million-year-old Rhamphorhynchus, seems to have preferred invertebrates, such as beetles, in its youth and vertebrates, such as fish, in adulthood, Bestwick found. He presented his research, which is not yet published in a peer-reviewed journal, today (Oct. 18) at the conference. [Photos of Pterosaurs: Flight in the Age of Dinosaurs]

Unwin has also investigated pterosaur growth rates by looking at the growth rings in the animals' bones (which were laid down like tree rings as the creatures grew up). He also looked at Rhamphorhynchus and Pterodaustro pterosaur fossils from across the creatures' life spans, from when they were hatchlings to when they were adults. He found that these animals grew slowly; pterosaurs weighing just 4 lbs. to 5.5 lbs. (2 to 2.5 kilograms) put on just 0.03 ounces (1 gram) a day, and it took these winged creatures several years to reach full size.

It's likely that most of the energy pterosaurs consumed went to flying and hunting, rather than growing, Unwin said. Pterosaurs like Rhamphorhynchus likely lived about 7 to 10 years, but a giant pterosaur, such as Quetzalcoatlus, may have lived a whopping 100 years. However, more research is needed to say for sure, Unwin noted.

To double-check his work, Unwin compared his calculated pterosaur growth rates with those of living reptiles. Pterosaurs fit right in with those animals, he found, as other reptile babies also take their time to reach full size. In contrast, baby birds, which are heavily cared for by their parents, grow much faster, reaching adult size in months, if not weeks, rather than years, Unwin said.

"Pterosaurs reproduced and grew in the same way as living reptiles, such as lizards and crocodiles, not like birds or bats as has long been thought," he said.

These findings "throw up a paradox," Unwin said, because pterosaurs' reproductive biology and growth rates "are quite unlike those of modern flyers, birds and bats, which have relatively high and constant body temperatures. By contrast, it seems that the physiology of pterosaurs was more like that of modern reptiles than birds or bats."

So, how did pterosaurs power their highly energetic flight? That remains a mystery, Unwin said.

"Pterosaurs were unique and had unique solutions to the energetic demands of flight," he said. "What they [the solutions] were, we have yet to discover."