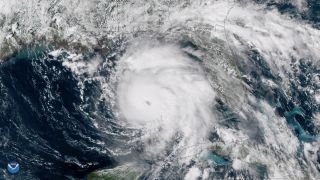 Hurricane Michael, seen here by the GOES East satellite at 2:45 p.m. ET on Oct. 9, 2018, strengthened as it moved north-northwest toward the Florida Panhandle.
(Image: © NOAA)

After gaining strength overnight, Hurricane Michael will be a storm of unprecedented intensity for the Florida Panhandle when it is expected to make landfall later today (Oct. 10).

"This storm will bring deadly surge to the Florida Panhandle and Big Bend coast and is not comparable to anything we have seen before," the National Weather Service forecast office in Tallahassee said in a warning just after 1 a.m. ET.

Hurricane Michael became a Category 4 storm overnight, packing 140 mph (220 km/h) winds with even stronger gusts. The storm would be the most powerful hurricane to hit the mainland United States this year. [Hurricane Season 2018: How Long It Lasts and What to Expect]

Florida Gov. Rick Scott declared a state of emergency for 35 Florida counties ahead of the "monstrous" storm, and more than 100,000 people have been ordered to evacuate, according to the Tampa Bay Times.

As of 5 a.m. ET, Michael was about 130 miles (215 kilometers) southwest of Apalachicola, Florida, and moving at about 13 mph (20 km/h), according to an advisory from the National Hurricane Center.

Unlike slow-moving Hurricane Florence, which made landfall in North Carolina last month and dumped record-breaking amounts of rain, Hurricane Michael is moving quickly. "The storm is fast-moving, so only 6-10+ inches (15-25+ centimeters) of precipitation are forecasted to fall over the Panhandle," Marangelly Fuentes, a NASA atmospheric scientist, told NASA's Earth Observatory.

However, Hurricane Michael's strong winds and storm surge could be devastating. The worst storm surge is expected to occur between Tyndall Air Force Base near Panama City, Florida, and Keaton Beach, Florida, and it could be up to 13 feet if it occurs at the same time as high tide.

The strength of the hurricane is especially alarming because many people in the Panhandle "have little or no experience with storms this intense," Fuentes said. "Only eight major hurricanes on record have passed within or near the projected landfall of Michael, and only three of those (Eloise 1975, Opal 1995 and Dennis 2005) occurred in the past 100 years.

Michael already proved deadly in Central America, where at least 13 deaths associated with the heavy rains and flooding were reported across Honduras, El Salvador and Nicaragua, according to the Associated Press.

After making landfall, Michael is expected to weaken as it swerves northeast over Georgia and South Carolina before reaching the Atlantic Ocean on Friday, according to the National Hurricane Center.