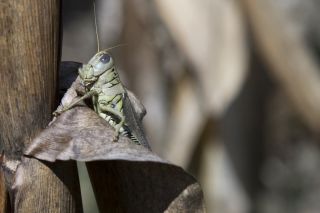 Can a task force of insects carrying genetically modified viruses save America's farms — or are they an uncontrollable bioweapon in the making?

This is the debate swirling around a controversial new Pentagon research project called "Insect Allies." Funded by the Defense Advanced Research Projects Agency (DARPA), the project involves using gene-editing techniques like CRISPR to infect insects with modified viruses that could help make America's crops more resilient. If a cornfield were hit by an unexpected drought or suddenly exposed to a pathogen, for example, Insect Allies might deploy an army of aphids carrying a genetically modified virus to slow the corn plant's growth rate.

According to the DARPA website, these "targeted therapies" could take effect in a single growing season, potentially protecting the American crop system from food security threats like disease, flooding, frost and even "threats introduced by state or non-state actors." [Biomimicry: 7 Clever Technologies Inspired by Nature]

Members of the scientific community are skeptical. In a letter published today (Oct. 5) in the journal Science, a team of five scientists voiced concerns that the project could be easily exploited as a biological weapon — or at least be perceived as one by the international community.

"In our opinion the justifications are not clear enough. For example, why do they use insects? They could use spraying systems," Silja Voeneky, a co-author of the letter and professor of international law at the University of Freiburg in Germany, told The Washington Post."To use insects as a vector to spread diseases is a classical bioweapon."

Blake Bextine, program manager for Insect Allies, is less concerned. "Anytime you're developing a new and revolutionary technology, there is that potential for [both offensive and defensive] capability," Bextine told The Washington Post. "But that is not what we are doing. We are delivering positive traits to plants… We want to make sure we ensure food security, because food security is national security in our eyes."

Insect Allies is still in the early stages of development, and at least four U.S. colleges (Boyce Thompson Institute, Penn State University, The Ohio State University and the University of Texas at Austin)have received funding to carry out research. Bextine told The Washington Post that the project recently achieved its first milestone — testing whether an aphid could infect a stalk of corn with a designer virus that caused fluorescence. According to the Washington Post, "the corn glowed."