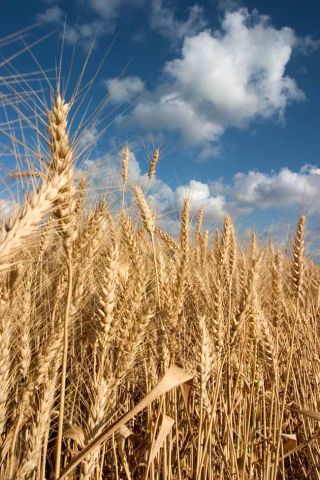 Marlene Cimons is a Washington, D.C. based freelance writer who specializes in science, health and the environment. Her work frequently appears in, among other outlets, The Washington Post, Microbe Magazine, and Climate Progress. She also writes for Climate Nexus, a nonprofit that aims to tell the climate story in innovative ways that raise awareness of, dispel misinformation about and showcase solutions to climate change and energy issues in the United States. She contributed this article to Live Science's Expert Voices: Op-Ed & Insights.

As prolonged drought and extreme temperatures have taken their terrible toll on food crops in recent years, nations have tended to focus on regional episodes, such as a single drought-afflicted state or region. Now, scientists have assessed the global scale of food crop disasters for the first time — and the news is not good.

In a new study, researchers from Canada and the United Kingdom estimate that cereal harvests — including rice, wheat and maize — decreased by an average of 9 to10 percent during droughts and heat waves between 1964 and 2007, with the worst effects seen in North America, Europe, and Australia and its neighboring islands. Furthermore, the impact has grown larger in recent years. With climate change likely to exacerbate extreme weather and make it more common in the future, the study is perhaps the most comprehensive examination yet of the historic impact of extreme weather on global crop production.

The researchers' work builds on an accumulating body of research and reports that consistently warn of the devastating effects extreme weather is having on agriculture. And the effects will continue, with consequences including drastic food shortages, experts say. Studies from Bangladesh, Ethiopia and Niger have shown that children have increased wasting and stunting rates after a flood or drought, according to the United Nations World Food Programme. For example, children in Niger born during a drought are more than twice as likely to be malnourished between the ages of 1 and 2. Moreover, the U.N. food program estimates that hunger and child malnutrition could increase by as much as 20 percent by 2050 as a result of climate change. [Food Prices, Global Hunger to Skyrocket by 2030, Oxfam Warns]

Extreme weather causes crop production losses, but until now, scientists "did not know exactly how much global production was lost to extreme weather events and how they varied by different regions of the world," said Navin Ramankutty, a professor of global food security and sustainability at the Liu Institute for Global Issues at the University of British Columbia, and one of the study authors.

The researchers, whose work appears in a recent issue of the journal Nature, also include Corey Lesk, of The Earth Institute at Columbia University and the NASA Goddard Institute for Space Studies in Manhattan, and Pedram Rowhani, a lecturer in geography and international development at the University of Sussex.

Keeping food on the table

While shortages don't necessarily spell extinction for your morning bowl of cornflakes, cereal could end up costing you a lot more. More important, because cereal grains are a staple of the global diet, the situation could have a catastrophic impact on farmers and the world's hungry.

"I think most Americans are relatively able to withstand food price shocks," said Lesk, first author of the study. "But the most vulnerable people, both in the United States and elsewhere, can be forced into dangerous situations by these disasters. I think it's important for Americans to keep these people in mind, especially because these disasters are likely to become more common in the future."

Those crises could mean lost income for American commercial farmers, as well as food shortages for poorer subsistence farmers, who rely on their crops to feed themselves and their families, Lesk said.

Food insecurity still persists in the United States; an estimated 14 percent of American households (17.4 million), were food "insecure" in 2014, meaning they had difficulty at some point during the year providing enough food for their families due to a lack of resources, according to a recent report from the U.S. Department of Agriculture.

The findings from the new research may help guide agricultural priorities in international disaster risk reduction, as well as adaptation efforts. "We can avoid a worsening food-security situation if we invest in adapting our crops to these extremes immediately, and especially if we step up and make solid commitments to avoid further climate change," Lesk said.

Lesk and his colleagues analyzed national agricultural-production data from the United Nations' Food and Agriculture Organization for 16 cereals in 177 countries. They also examined 2,800 international weather disasters from 1964 to 2007.

They found that cereal harvests decreased due to both droughts and extreme heat, and production levels in North America, Europe and Australasia dropped by an average of 19.9 percent from droughts alone — roughly double the global average.

Moreover, the average impact of recent droughts — those between 1985 and 2007 — was a 13.7 percent loss, which is 7 percent greater than the 6.7 percent impact during droughts that occurred earlier, between 1964 and 1984. The reasons for this are not clear.

"We found that the average impact of drought disasters on crops has gotten worse," Lesk said. "But it is still debated whether droughts themselves have gotten more severe, so another explanation could be that crops have gotten more susceptible to drought over the decades. That could mean, speculatively, that we're already on the wrong path with regard to adapting our crops to a changing climate.

The researchers found that production losses due to droughts were associated with a reduction in both harvested area and yields, whereas extreme heat mainly decreased yields.

Harvested area refers to the planted cropland area that is harvested in a given year.

"It takes time, energy and money to harvest crops from a field, and if crops are severely enough damaged, then farmers may choose not to harvest at all," Lesk said. "You could call this a 'total crop failure,' and it shows up in the data as a drop in harvested area. Yield is the mass of grain harvest per unit area harvested — in other words, the productivity of the crops on an area basis. If a crop fails completely and is not harvested, then it doesn't end up in the yield calculations, so you have to consider both metrics to get a full picture."

The scientists concluded that droughts caused partial and total damage to crops, resulting in drops in both yield and harvested area. Heat waves, in contrast, only resulted in yield declines. "Droughts can cause more complete crop failures, possibly because they can last so long and damage crops so severely that farmers don't bother harvesting," Lesk said. "Another aspect is that longer droughts might discourage planting altogether, possibly because farmers have run out of water for irrigation or money for seeds."

The scientists did not specifically analyze any price or trade effects, but they have "come up with a quick, rough estimate for the 9 to 10 percent in annual dollar terms," Lesk said. "About $10 billion worth of crops per year, globally, has been lost to drought and heat waves," Lesk said.

The researchers did not find any impacts from floods or extreme cold. Also, in one optimistic result, their analysis found that extreme weather events had no lasting impact on agricultural production in the years that followed the disasters.

Nevertheless, the work provides another compelling argument "to start scaling up the myriad climate change mitigation strategies that already exist — green subsidies and investment, carbon taxes and markets, and especially ending fossil fuel subsidies," Lesk said. "Climate change poses a colossal economic risk to the world — tens to hundreds of trillions of dollars in damage, by some estimates. Spending now to avoid it is truly an excellent investment."