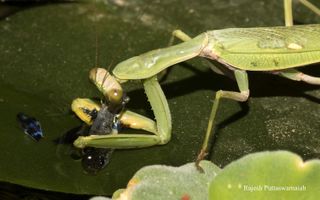 Dead in the water? Not quite — this male praying mantis (Hierodula tenuidentata) started eating its partly-submerged prey while the unlucky fish was still alive.
(Image: © Rajesh Puttaswamaiah)

With their folded, spiky arms and large-eyed, triangular faces, praying mantises are instantly recognizable, and are well-known for their predatory prowess. But while mantises typically prey on insects, one opportunistic individual in India has developed a taste for fish.

For the first time, scientists observed a praying mantis hunting guppies, a type of tropical freshwater fish. The long-armed predator snatched up and snacked on the tiny fish in an artificial pond in southwestern India, demonstrating a behavior that was previously unknown in these insects.

The hunter, a male Hierodula tenuidentata — also known as a giant Asian mantis — measured about 2 inches (6 centimeters) in length, and it captured guppies measuring 0.8 to 1.2 inches (2 to 3 cm) long, according to a new study. [Lunch on the Wing: Mantises Snack on Birds (Photos)]

Over five nights in March 2017, the mantis visited the artificial pond in a roof garden planter. It perched on water lilies and water cabbage plants on the pond's surface and "fished" for its dinner, capturing and devouring up to two fish per night, feasting on a total of nine guppies, the study authors reported.

The scientists' unique observations describe the behavior of only one insect. Nevertheless, some interesting conclusions can be applied more broadly to help with the general understanding of how mantids hunt, lead study author Roberto Battiston, a researcher with the Musei Canal di Brenta in Valstagna, Italy, told Live Science.

For example, there was no shortage of food in the garden; there were plenty of flies and other insects that the mantis could have eaten. Yet the hunter returned to the pond every night for five consecutive days, choosing to fill its belly with fish rather than flies.

"This behavior sounds very much like a precise hunting strategy — not random choices," Battiston said.

When mantids are on the prowl for food, their eyes are drawn to movement, rather than to shapes or colors. In the case of the fishing mantis, the insect was probably attracted to a sudden movement of the guppy's large, flag-like tail under the water's surface. And when the mantis lunged with its powerful forelimbs, it caught the fish, Battiston said.

But catching a squirming meal in water is very different from plucking it out of the air. That the mantis was able to do this over and over again suggests an unexpected adaptability in mantis vision and hunting abilities, he explained.

Mantises are voracious hunters that eat anything they can catch (including other mantids), and the larger the mantis, the bigger the prey it can nab. Birds are a frequent menu item for big mantids; last year, researchers described examples of mantises hunting small birds in 13 countries, targeting hummingbirds and small passerines (the group that includes finches, sparrows and canaries).

Encounters between mantids and large prey — such as tarantulas, snakes, mice and lizards — are documented in videos on the internet, Battiston said. But the overwhelming majority are staged matches in which the mantis is introduced to its meal under artificial conditions that wouldn't occur naturally.

"Mantids are well known to be excellent predators, so it is easy to put them in a cage and make them fight or feed on any sort of strange animals," he said.

On the other hand, a mantis in the wild is usually more cautious about approaching bigger prey. But when mantises are hungry, "nothing can stop them," Battiston said.

"Once I observed a large female of Mantis religiosa grabbing a bee with one leg," he said. "While the insect was fighting like hell, trying to sting and kill the mantis, she caught another bee with her other leg. She finished this very spicy double meal in about half an hour, with calm elegance!"

Other studies have shown that mantids can learn from harmful experiences — a technique called aversive learning, Battiston said. However, these new findings suggest that mantids can also formulate new methods for accomplishing a task — catching prey — suggesting that they may also be capable of more complex cognitive goals, he said.

The findings were published online today (Sept. 20) in the Journal of Orthoptera Research.