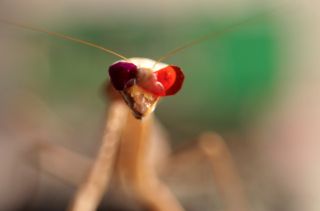 Recently, some of the same scientists who created a spectacle in 2016 by outfitting praying mantises with miniature 3D specs went a step further, taking a closer look at how mantises perceive objects in three dimensions.

Whereas prior research demonstrated that mantises could see in 3D — the only known insects to do so — the scientists' new study describes experiments comparing mantises' vision to human vision. The researchers found that mantises arrive at their 3D perception by processing visual information differently than people do — an unusual technique that allows mantises to see some objects in 3D even when humans can't. [Image Gallery: Bug's Eye Camera]

Stereo vision, also called stereopsis, enables some animals — including humans and mantises — to perceive how far away they are from objects. Slight differences in the images of what they see are relayed to the brain and processed into a single image. Those subtle variations in the two original views help the brain pinpoint the object's location in three dimensions, the scientists wrote in the study.

By fitting 3D glasses temporarily to mantises' eyes with beeswax and showing them 3D footage, researchers learned that mantises would respond to 3D video of prey insects by trying to catch them. To better understand how this stereo vision worked, they tested their tiny subjects using vision tests typically given to people.

When people and most other animals use stereopsis, they're comparing the brightness of the two images seen separately by their eyes, in order to visualize 3D space. The mantises, however, are doing something very different: They're focusing on where the brightness is actively changing between the two images, which tells them the distance to their target object even when it is camouflaged against a similar background texture, the study authors reported.

"This is a completely new form of 3D vision, as it is based on change over time instead of static images," the study's lead author, Vivek Nityananda, a behavioral ecologist at Newcastle University in the U.K., said in a statement.

"In mantises, it is probably designed to answer the question, 'Is there prey at the right distance for me to catch?'" Nityananda added.

The study's findings suggest that mantises probably can't see in 3D when looking at static images. However, this technique does allow mantises to perform better than humans at detecting the distance to a moving object under certain circumstances, such as when there was a significant difference in brightness between the right image and the left one, according to the study.

The findings were published online today (Feb. 8) in the journal Current Biology.