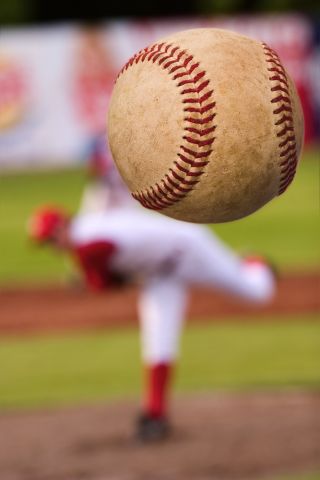 Pitcher Juan Sandoval is aiming for the major league rosters, with one seemingly insurmountable obstacle: Sandoval, who is in camp with the Tampa Bay Rays, is blind in one eye.

Sandoval, once a prospect for the Seattle Mariners, lost vision in his right eye after pellets from a shotgun blast hit him in 2006. He has worked his way back, spending the past two seasons pitching in the Mexican League, according to MLB.com.

But while two good eyes and the benefits of added depth perception may seem like a necessity at the highest level, Sandoval would not be the first athlete with such a disadvantage to compete at this caliber. And neuroscientists say two good eyes are helpful, but not necessary in sports. A combination of depth-related visual cues and repeated motions can help compensate for the seeming disadvantage.

In football, Wesley Walker, a star receiver for the New York Jets in the 1970s and 1980s, caught 438 passes over 13 seasons despite being legally blind in one eye. In hockey, former rookie-of-the-year Bryan Berard nearly lost his right eye after a stick hit him during a game in 2000, but he was able to return to the ice. Using a corrective lens, he played for six more seasons.

Testing after his playing days revealed that Babe Ruth had terrible vision in one eye (he claimed never to have had an eye exam before). This has raised the question of whether one of the best hitters of all time did it with limited depth perception. [Album: 16 Totally Awkward Historical Baseball Cards]

Two eyes better than one?

While depth perception is important, researchers have noted that it involves more than simply stereopsis, the term for how the eyes work together to discern up-close distances..

"I think in a sport like baseball, stereo is completely useless," said Margaret Livingstone, a professor of neurobiology at Harvard University. "You don't use stereopsis farther than a few yards away."

Close up, the eyes provide two slightly different images, and the brain uses the differences to gauge depth. But beyond a few yards, the view from each eye is similar, and so using both doesn't necessarily help.

"Your brain uses all kinds of cues to compute distance and depth," including shadows, Livingstone told LiveScience.

And this is equally true for people with one good eye, or people whose eyes do not work in sync. An estimated 5 to 10 percent of the population lacks stereopsis, but many may not realize it because the deficiency only affects a limited range of activities. [Vision Quiz: What Can Animals See?]

While stereopsis affects things like threading a needle or other close-up tasks in which small degrees of depth matter, it isn't as important for baseball, Livingstone said. In that sport, a ball approaches at a speed of 90 mph (145 km/h) from 60 feet (18 meters) away.

Livingstone, who studies how a lack of depth perception influenced the work of artists, has examined Ruth's eyes in pictures from his playing days. She concluded that Ruth's poor vision must have developed early in life.

The researcher noted that Sandoval probably does face an extra challenge since he lost an eye later in life and had to adjust, rather than relying on the same visual cues he had always used.

Lauren Boden, a junior infielder on the softball team at Pomona College, was first author on a study of the stereovision of young baseball and softball players. She thinks Sandoval faces a challenge, "but there are other visual cues besides depth perception that you can use to field the ball."When it comes to hitting, she said, a lot of it comes down to timing and watching the pitcher's motions.

Her father, Dr. Scott Boden, director of the Emory Orthopedics & Spine Center, noted that in many cases athletic performance comes down to successful repetition.

"When you look at a wide receiver, my assumption would be he could run a 20-yard pattern and, with timing, know where the ball would be," Boden said.

Researchers are left to make similar conjectures about Ruth. In a 1997 case report, researchers tried to determine whether Ruth could have been so successful if he had only one good eye.

Noting that the slugger scored 50 percent better than the average adult male on a test of hand-eye coordination when he was studied at Columbia, Canadian researchers wrote in the 1997 case study that, "binocular vision is not especially required for hitting and pitching a baseball. Ruth may have been a great baseball player because of other attributes, such as an ability to judge the type of pitch from the pitcher's action and very quickly move the bat to where he wanted it to go."