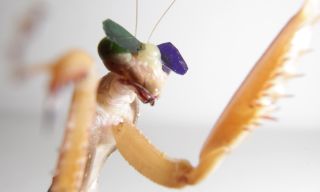 Hey, dude, check out my specs! A praying mantis wears 3D "glasses" for an experiment proving that these insects use 3D vision to hunt.
(Image: © Newcastle University)

By fitting praying mantises with teeny, tiny glasses, scientists have proved that these insects have 3D vision.

"Despite their minute brains, mantises are sophisticated visual hunters which can capture prey with terrifying efficiency. We can learn a lot by studying how they perceive the world," study researcher Jenny Read, a professor of vision science at Newcastle University in the United Kingdom, said in a statement.

To determine whether insects use 3D vision to hunt, Read and her colleagues had to come up with a way to show mantises both two- and three-dimensional images. So the researchers invented mantis 3D movies.

It was a trial-and-error process. Modern 3D glasses, like the ones people might wear to go see "The Force Awakens" in 3D IMAX, didn't work, because the mantises were too close to the screen. Old-school red-and-blue lenses wouldn't work either, because mantises don't see red light well, the researchers wrote Jan. 7 in the journal Scientific Reports.

So the researchers created custom glasses with blue-and-green lenses and attached them to the mantises' bulging eyes with beeswax. The scientists then showed the insects videos of spiraling disks in either 2D or 3D, which looked to the mantises like insect prey. [Gallery: Out-of-This-World Images of Insects]

The mantises struck at 3D "insects" much more than they did 2D "insects," the researchers found. This shows that mantises use stereopsis, or the slight difference in images from each eye, to see in 3D.

Prior to this study, no one had been able to study stereopsis in insects, the researchers wrote, because there was no way to show the little creepy crawlies stimuli in two or three dimensions interchangeably.

"This technique opens up broad new avenues of research," the investigators wrote. In other words, expect to see spectacles on more bugs in the future.