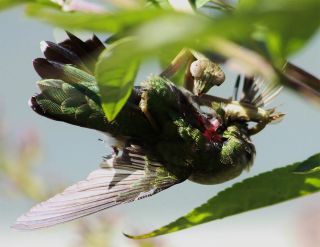 Many bird species are known to dine on insects, but for a dozen species of praying mantises, birds aren't the predators — they're the prey.

Carnivorous mantises are deadly hunters that use their powerful front legs to capture insects and spiders; some larger species have even been observed nabbing small vertebrates, such as amphibians, lizards, snakes and mice.

And now, scientists have found that mantises distributed around the world are also regularly catching and eating small birds, according to a new study. The researchers discovered 147 examples of mantises hunting birds in 13 countries, on every continent except Antarctica. [Lunch on the Wing: Mantises Snack on Birds (Photos)]

To gather their data, the researchers scoured extensive records of mantises preying on birds, delving into published studies, academic dissertations, books and posts on social media. The earliest description they found — from Argentina — dated to 1864, but 67 percent of the observations took place between 2000 and 2015, mostly in warmer climates, the researchers wrote in the study.

More than 70 percent of all the examples were from the United States, and the birds most often on the menu were ruby-throated hummingbirds (Archilochus colubris), which the mantises frequently captured near flowers and hummingbird feeders, the study authors reported.

As ambush predators, mantises lie in wait until their prey is close. They hold fast to a perch with four hind limbs as they strike with their front legs, and they begin to feed on the living victim once it is in their grasp. In some cases, the birds' brains appeared to be a favorite part of the meal, the scientists wrote.

One account dating to 1922 in Australia described an unidentified mantis near four dead birds, "each with a hole in its head through which its brains had been extracted," the study authors wrote.

In total, about 24 species of birds were identified as mantis prey. This group included hummingbirds and small passerines — perching birds such as sparrows, finches and canaries. And once a bird was caught, its fate was as good as sealed, with only 2 percent able to free themselves from the insect's clutches without human intervention, the scientists found.

Most of the birds caught by mantises were relative lightweights, weighing in at less than 0.2 ounces (6 grams). By comparison, some of the mantis species weighed as much or slightly more than their prey. But mantises are also known for their ability to snag meals larger and heavier than they are. A prior study reported a mantis in Australia catching a tree frog that weighed 0.9 ounces (25 g), and another study described a mantis "attempting to chew on the wing" of a bird that weighed 0.5 to 0.7 ounces (14 to 19 g), according to the study.

The bird-hunting mantises that the researchers encountered were generally female, with bodies measuring at least 2.4 inches (6 centimeters) in length. In two instances, the hungry female mantis was found multitasking — feeding on a bird while simultaneously mating with a male, study lead author Martin Nyffeler, a senior lecturer in zoology at the University of Basel in Switzerland, told Live Science in an email.

Reproductive needs could possibly explain why only female mantises were discovered eating birds — they might require more energy, as female spiders do, prior to producing their eggs, Nyffeler said.

The scientists also learned that in North America, about 55 percent of the birds counted in the study fell prey to invasive species of mantises, which were introduced about 100 years ago, and which are both larger and heavier than native mantises.

Invasive or not, mantises probably aren't catching nearly as many birds as domestic cats, which kill hundreds of millions of small birds each year in the U.S. alone. But the study's findings suggest that mantises do present an unexpected and significant risk to bird populations around the world — particularly hummingbirds, the study authors reported.

"On a global scale, bird mortality caused by praying mantises might be rather insignificant compared to the losses caused by raptor birds and cats," Nyffeler said in a statement.

"Notwithstanding that, if we limit our consideration to the suburban/urban areas in USA, we arrive at the conclusion that praying mantises pose a considerable threat to hummingbirds," he added.