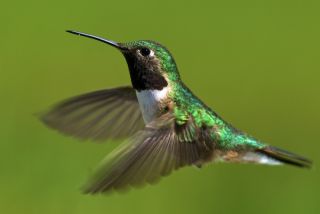 Missed connection: Me, a broad-tailed, red-throated hummingbird. You, a delicate yellow flower full of nectar. I flew all the way from Central America to find you, but you'd withered away. Why did you bloom so early?

Okay, so hummingbirds may not be posting plaintive ads on Craigslist anytime soon, but new research finds that they are struggling to sync up their schedules with those they hold dear. Glacier lilies, flowering plants that bloom in mountain meadows in western North America, help sustain broad-tailed hummingbirds during breeding seasons. But a new study finds that these plants are blooming 17 days earlier than they did in the 1970s, thanks to climate change.

"In some years, the lilies have already bloomed by the time the first hummingbird lands," study researcher Amy McKinney of the University of Maryland said in a statement.

That means less food to go around for the 4-inch (10 centimeter) birds, which migrate between Central America in the winter and the western U.S. in the spring. Male hummingbirds typically scout out territories before the first flowers bloom, but the time between the first bird and the first flower has shrunk by 13 days over the last 40 years, McKinney and her colleagues report. If that trend continues, the hummingbirds will miss the first flowers entirely in two decades.

According to the researchers, hummingbirds that breed in southerly climes, such as Arizona, are not experiencing this timing mismatch. But in high-altitude areas such as the Rocky Mountain Biological Laboratory in Crested Butte, Colo., where this study was done, climate change is happening rapidly.

If spring continues to come early in the Rockies, birds may arrive to find their food source gone, said study researcher David Inouye, also of the University of Maryland. If that happens, "where have all the flowers gone?" may become, "where have all the hummingbirds gone?"

The researchers will detail their findings in an upcoming issue of the journal Ecology.