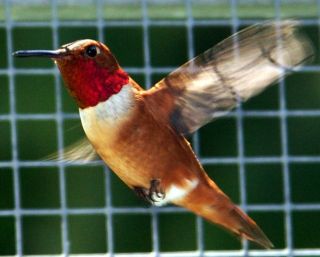 VIRGINIA BEACH, VA—Unlike humans who must fuel up hours before intense exercise, hummingbirds can refuel in mid-flight, according to a new study.

Within several minutes of lapping up sweet nectar, the rufous hummingbird [image] uses the just-ingested sugars to fuel more flying and hovering so it can consume more nectar, a new study finds.

The fast-paced feeding isn't for kicks.

Hummingbirds have the highest energy expenditure of any warm-blooded animal, with a heart rate of up to 500 beat-per-minute, blindingly fast wing beats and sustained hovering. So this bird is nearly always on the edge of starvation, needing to slurp up more than its body weight in nectar each day.

Kenneth Welch and Raul Suarez of the University of California, Santa Barbara fasted hummingbirds before giving them cane nectar, a type of nectar that has a characteristic level of the carbon-13 isotope, a form of carbon having a different number of neutrons. As each bird lapped up the sugary substance, the scientists used a special device on the feeder to measure its oxygen intake—used to calculate energy consumed—and the carbon in its breath.

By comparing the energy requirement with the amount of carbon-13, they showed that within 20 minutes of feeding, the hummingbirds were supporting more than 90 percent of their hovering needs with the cane sugar.

Compare that with a human: An elite cyclist at 60 percent of his maximum aerobic rate can only support 15 to 30 percent of his energy needs with consumed sugars. He needs a high-carb meal such as spaghetti the night before an event in order to process and shuttle the sugar energy to his muscles.

"This is the first time anybody has shown a vertebrate animal able to support such a high fraction of exercise metabolism with very newly ingested sugar," Welch told LiveScience.

Welch presented his finding here today at the annual meeting of the American Physiological Society.