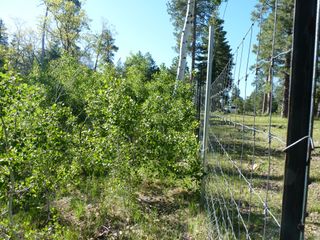 The growth of aspens and other plants dramatically increases when winter-browsing elk are fenced out.
(Image: © Tom Martin, U.S. Geological Survey)

Like dominoes given one nudge, climate change in the form of reduced winter snowfall on mountaintops has subtle but powerful cascading effects felt throughout entire ecosystems, a new study finds.

In the northern mountains of Arizona, elk spend their winters in lower elevations where there’s much less snow and the cold is less pronounced. But the decrease in high-elevation snowfall in the mountains over the last 25 years has allowed elk to forage in these areas throughout winter. Researchers found that the elks' year-round high-elevation browsing has decimated the density of seasonal woodsy plants, which, in turn, has impacted the populations of songbirds (animals you might expect would actually benefit from less snow).

By preventing elk from entering several study sites for six years, the researchers were able to reverse the multi-decadal decline in plant and bird populations in these locations.

"Ecologic communities are pretty complex. There are all these tight interactions going on," said study co-author Tom Martin, a wildlife researcher with the U.S. Geological Survey. "Perturbation from climate can affect those communities in many indirect ways and cause all of these ramifying effects." [Odd Effects of Climate Change]

The densities of seasonal woodsy plants, including aspen and maple trees, in the northern Arizona mountains have steadily declined over the last two decades. Martin and his colleague John Maron, a biologist at the University of Montana, hypothesized that this decline is primarily the result of one of two things: decreased soil water or increased exposure to hungry elk.

To find out, the researchers set up 25-acre enclosures around three drainages, or vegetation-rich valleys created by snowmelt. By keeping the elk out, the enclosures essentially mimicked the effects of large snowfall.

The researchers found that plant populations in the enclosures rebounded to levels last seen in 1996 — suppressing winter-browsing elk for six years effectively reversed 15 years of plant-density decline. Plant populations in nearby open drainages, however, did not improve over the six years.

Similarly, the populations of five key songbird species rebounded in enclosed drainages. "With more vegetation, there are more nesting areas, and it becomes harder for predators to find the nests," Martin told Livescience.

Since the populations of elk have also strongly declined over the last 11 years, the results show that the elks' new tendency to stick around over winter is ravaging the plant and bird communities. "It doesn't take very many animals to have a pretty large impact if they’re there year-round," Martin explained.

Eric Post, a biologist at Pennsylvania State University who was not involved with the research, said that the study demonstrates how observational and experimental research can compliment each other. "Both are necessary to study climate change ecology," Post told LiveScience.

While impressed with the study, Post thinks that the researchers "didn't nail down the driving factor in the relationship between plant growth and bird abundance." It seems convincing that the architecture of the vegetation would provide the birds with more nesting opportunities, he said, but that theory doesn't take into account the effect of invertebrate (animals without a backbone) abundance. The winter elk may also be affecting the populations of local insects, which the birds eat.

Still, Post believes that the study has important implications for conservation. "If you are interested in the conservation of birds, you need to look at more than just the birds and the vegetation they are dependent on," Post said. "You need to look at the broader system of browsing animals."

Martin agrees, adding that by "recognizing that these things happen, we can target priority habitats for conservation."

The study was published online Jan. 10 in the journal Nature Climate Change.