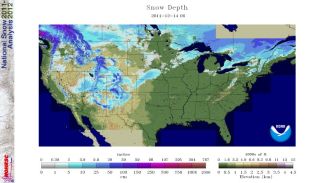 In mid-December last year, the Deep South was reeling from an unusually big snowfall. Today, snow is scarce anywhere on the East Coast or in the Midwest. Instead, the powder is falling out West, where Arizona has been transformed into a winter wonderland.

The lack of big snow has folks scratching their heads in the Midwest.

"Everybody's talking about," said Wayne Hoepner, a meteorologist with National Weather Service in Grand Rapids, Mich., where this year's forecast calls for more snow than normal. [Images: Snow from Space]

This time last year, lake-effect snow in the Northeast and Midwest was falling hard. The snow was so bad in Buffalo, N.Y., even the snowplows got stuck. Several feet of snow fell in western New York and in cities around the Great Lakes. That hasn't happened yet this year.

"We haven't really had any cold weather or cold air moving over the lake," Hoepner told OurAmazingPlanet. "We're a little concerned that we haven't had much yet, but not all that concerned."

Lake-effect snow is created when bitter Arctic air spills south over the warmer Great Lakes. The cold air warms, moistens and forms into snow clouds, which drop the white stuff in whichever direction the strongest wind is blowing. Lake-effect snow is heaviest downwind, or leeward, of a water body.

Even though the ground in much of the country is bare, as seen in the National Snow and Ice Data Center's map of snow depth, the 2011 winter has already given a few fleeting surprises.

A surprisingly early snowstorm smacked the East Coast on Halloween, knocking out power to thousands in Connecticut. New York’s Central Park recorded 2.9 inches of snow (7.6 centimeters), the first time since record-keeping began in 1869 that an inch or more of snow has been recorded there during the month of October, according to the NWS.

A week before, that same weather system created wild weather in Denver. The Colorado capital saw temperatures of 80 degrees Fahrenheit (27 degrees Celsius) on Oct. 24, a record for the day in Denver. Snow and freezing temperatures came in with the winter system the next day.

It wasn't much, but on Nov. 28, Alabama saw a November snowfall for the first time in 35 years. From Memphis, Tenn., to Atlanta, a rare snow coated cities that day as the temperatures dropped sharply due to a "cold bubble" that formed over the South.

In early December, a light snow fell on north Texas, with heavier snow blanketing much of New Mexico. Interstate 25 was snow-packed in New Mexico, and severe wind created blizzard and whiteout conditions.

At least one predictably snowy region is getting their fair share this year. Today (Dec. 14), more than a foot of snow fell in Flagstaff, Ariz., according to the NWS.

"Nothing unusual at all," David Blanchard, a meteorologist with the NWS in Flagstaff, said. "We get heavy snow here every winter."

A low-pressure system moved through the region, which is 7,000 feet (2,100 meters) above sea level, and drew in moisture from the south. Nearly 3 feet (1 m) of snow has fallen in the highest elevations.