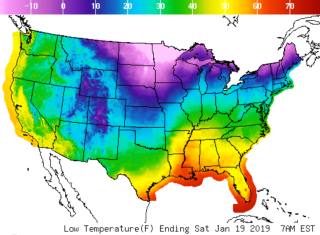 A major snowstorm has begun its trek across the United States, according to The Weather Channel, with significant snowfall already underway in the Dakotas, Minnesota and Iowa. Over the course of the weekend, it's expected to impact much of the Midwest and Northeast, and send rain into the Southeast.

The National Weather Service (NWS), where forecasters are working without pay due to the government shutdown, attributed the large storm to two factors. First, a low-pressure system, the sort of air mass typically responsible for storm activity, has moved over the continent from the Pacific Ocean. After crossing the Rockies (where it already caused some snowfall) it was "re-energized" over the Plains Friday (Jan. 18). At the same time, a "strong surge" of Arctic air (likely from the weakening of the polar vortex) has moved down through Canada and merged with the system, creating a very wide air mass with the capacity to produce lots of snow. [The Snowiest Places on Earth]

Some of the most significant problems associated with the storm may fall along the transition zone between snow and rain, where the cold Arctic mass meets the warmer air to the south. In those areas, particularly the Ohio Valley and the mid-Atlantic, strong winds, sleet and freezing rain are all likely, according to the NWS.

New York City is expected to see snow, but details are still uncertain.

After the storm passes, a long period of deep cold is expected, which could pose problems, especially for anyone who loses power during the storm. And there's a real threat of widespread power losses according to The Weather Channel, thanks to the combination of heavy ice accumulation and strong winds.