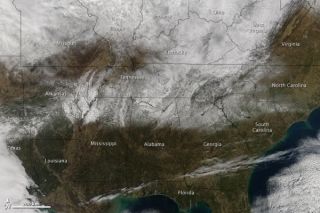 Last night it wasn't the stars, but the snow that fell on Alabama.

It wasn't much, but yesterday (Nov. 28) was the first time since 1976 that Alabama has had snow during November. Making the day even weirder weather-wise, temperatures in the Deep South dipped to near the freezing point while temperatures in many places in the Northeast topped 70 F (21 C).

New York City yesterday set a record high temperature of 70 F for the date, breaking a record set in 1896 and tied in 1990.

The white stuff that fell across Alabama mostly fell in the northeast part of the state.

"It looks like they had an inch or so, maybe more," said Andy Kula, senior forecaster with the National Weather Service in Huntsville, Ala."None of it has really stuck because it's too warm on the ground."

The most recent occurrences of November snow in Alabama came  in 1976 when flakes fell on Huntsville and 1969 when snow came to Muscle Shoals, Kula told OurAmazingPlanet.

Kula said snow and a wintry mix has been steadily falling on Huntsville since last night. The southern slide into winter is due to a "cold bubble" that has formed over the South, according to meteorologists. A large area of low pressure in the atmosphere has settled over the middle of the country. The bottom of that dip, or trough, has closed off into a large upper atmosphere low-pressure system — the cold bubble — centered over Mississippi.

The cold bubble is on the move — slowly — toward Northeastern cities, where it should lose some energy, but could still bring wintery weather with it.