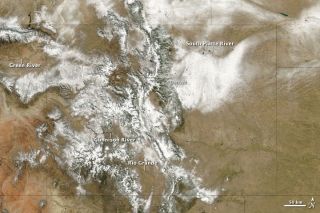 A big storm hit the Denver area in October 2009. Could the area be in for a repeat?
(Image: © NASA Earth Observatory. )

Record high temperature one day, wintry weather the next. That's life in Denver this week.

Yesterday the Colorado capital saw 80 degrees Fahrenheit (27 degrees Celsius), an Oct. 24 record for Denver, and today the temperatures are plummeting and snow is expected.

Wild weather swings and an early winter chill occasionally hit this region of the Rockies, but the swing is usually spread out over several days, not in less than 24 hours.

"It's not unheard of, but this is a little more rapid than usual," said Matthew Kelsch, a hydrometeorologist at the University Corp. of Atmospheric Research, in Boulder, Colo.

"Oftentimes in the fall and the spring there can be some wild weather swings along the Front Range in Colorado and Wyoming," Sobel told OurAmazingPlanet.

While yesterday was balmy, today the weather was declining fast. Temperatures will drop into the 20s F (around minus 7 C) tonight. The National Weather Service called for a winter storm warning from 9 p.m. local time until tomorrow at 6 p.m. [Related: Coldest Places on Earth]

The snow should fall harder after midnight, bringing 3 to 7 inches (8 to 18 centimeters) by daybreak. The storm could bring 10 to 12 inches (25 to 30 cm) to the surrounding foothills, Sobel said.

Blame the cold snap on a wiggly jet stream, the river of air that carries storms from west to east across the United States.

That storm brought only an inch (2.5 cm) of snow, but it was still a "total shock," Kelsch said.

"There was actually steam coming off the street because the pavement was so warm," he said.

Sobel said the weather tends to warm up in front of a major storm as it develops out over the Rockies and the Continental Divide, so that "when the cold air arrives, it will go rushing down the Front Range."

By Thursday the weather will swing up again, the National Weather Service predicted. So whatever snow accumulates won't stay there for long, Sobel said.

"Once the storms go on by and the sun comes back out, things will melt very rapidly," he said.