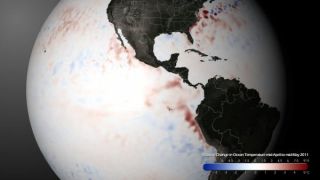 La Niña is getting the blame for this spring's crazy weather, but it's really what one NASA scientist is calling "La Nada" the disappearance of La Niña that's the culprit.

The United States has endured wild weather this year, including record snowfall, killer tornadoes and devastating floods . Broad patterns of air flow, including those fueled by La Niña a band of cold water stretching across the Pacific Ocean in the atmosphere can have a big influence on seasonal weather.

And while La Niña likely did have some influence in the winter, NASA climatologist Bill Patzert says that it's waning; instead, what he calls "La Nada," is really to blame for the intense weather we've seen in 2011.

"La Niña was strong in December," Patzert said. "But back in January it pulled a disappearing act and left us with nothing La Nada to constrain the jet stream. Like an unruly teenager, the jet stream took advantage of the newfound freedom, and the results were disastrous."

The jet stream is a high-speed air current that is essentially an atmospheric fence where cool, dry air meets up with warm, moist air two of the main ingredients for severe storms.

La Niña and El Niño are opposite extremes of a great Pacific oscillation. Every two to seven years, surface waters across the equatorial Pacific warm up (El Niño) and then they cool down again (La Niña). Each condition has its own distinct effects on weather.

The winter of 2010 began with La Niña conditions taking hold. A "normal" La Niña would have pushed the jet stream northward, pushing cold arctic air (one of the ingredients of severe weather) away from the lower United States. But this La Niña petered out quickly, and no El Niño rose up to replace it. The jet stream was free to misbehave.

"By mid-January 2011, La Niña weakened rapidly and by mid-February it was 'adios La Niña,' allowing the jet stream to meander wildly around the U.S," Patzert said. "Consequently the weather pattern became dominated by strong outbreaks of frigid polar air, producing blizzards across the West, Upper Midwest, and northeast U.S."

Before tornado season, Patzert told OurAmazingPlanet that we should hope for a re-emergence of La Niña to bring about a mild tornado season. But the disappearance lingered into spring and things got ugly.

Strong winds carrying warm, moist air from the Gulf of Mexico met cold jet stream winds blowing in from the west. The two air masses were stronger than usual this year, and when they mixed, they fueled the intense thunderstorms that spawned the tornadoes that have rocked the country.

"The jet stream on steroids acted as an atmospheric mix master, causing tornadoes to explode across Dixie and Tornado Alleys, and even into Massachusetts," Patzert said.

This year, a monstrous tornado hit Joplin, Mo., killing more than 150 people. That tornado was classified as an EF-5, the most intensely damaging on the Enhanced Fujita tornado damage scale . The Joplin tornado is the deadliest single twister to strike the United States since 1953.

This year's tornado season is now tied for the fifth deadliest on record. [Related: The Top 5 Deadliest Tornado Seasons .]

The historic tornado season has combined with devastating floods to look more like disasters from the early decades of last century . The last time any spring in the United States was remotely this severe was in 1927.

The massive snowpack melt, combined with a lot of rain this spring, caused waters to swell along the Missouri River and its tributaries. To relieve flooding pressure, the U.S. Army Corps of Engineers has said they may be forced to release water from reservoirs until mid-August.

All this because of a flaky La Niña?

"La Niña and El Niño affect the atmosphere's energy balance because they determine the location of warm water in the Pacific, and that in turn determines where huge clusters of tropical thunderstorms form," said Robert Schneider, of the Storm Prediction Center. "These storms are the main energy source from the tropics influencing the large scale pattern of the jet stream that flows through the U.S."

Schneider said that the very strong and active jet stream across the lower United States in April "may have been related to the weakening La Niña conditions observed over the tropical Pacific."

And of course, looking at an even broader picture, there's this million dollar question: Does any research point to climate change as a cause of this wild weather?

"Global warming is certainly happening," Patzert said, "but we can't discount global warming or blame it for the 2011 tornado season. We just don't know ... yet."