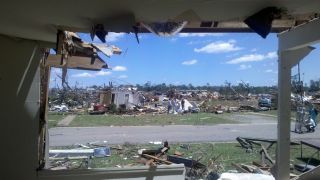 The view from the door of a damaged home in Tuscaloosa, Ala.
(Image: © Emily Butler)

Some climate models suggest that a warming future could herald more intense storms like those that ripped through the Southeast on Wednesday night.

But that doesn't mean the southern storms and tornadoes were a manifestation of climate change, climate scientists say. That's because teasing out the influence of climate on weather takes time.

"The impacts of climate change on any weather events will likely only be seen in the statistics -- more rainfall that occurs in intense bursts, more overall water vapor, more heat waves, less cool nights," Gavin Schmidt, a climate scientist with NASA's Goddard Institute for Space Studies, wrote in an email to LiveScience. "But the combination of events that lead to the tornado swarms we've seen are both rare and complex, and to ask climate scientists to pronounce definitively on them the instant they happen is just asking for trouble."

The death toll from this week's line of storms has topped 200, making it likely the deadliest tornado outbreak since 1974.

Even in severe storms, tornados are relatively rare, said Morris Weisman, a senior scientist at the National Center for Atmospheric Research in Boulder, Colo. Long-lasting, rotating thunderstorms called supercell storms are the breeding grounds for severe tornadoes, Weisman told LiveScience, but only about 25 percent of supercell storms result in a tornado.

Ingredients for the perfect storm

To form, supercell storms require two atmospheric ingredients -- warm, moist air near the surface colliding with cooler air high in the atmosphere, and a vertical windshear, or a change in speed and direction of wind with height. When warm, moist air from the Gulf of Mexico collides with vertical windshear caused by a strong jetstream, supercells form. [Infographic: Inside Look at Tornado Season]

The question for climate scientists, then, is whether climate change will make it more likely for these two atmospheric ingredients to clash into one another.

While there are no models precise enough to predict the birth of individual storms, climate researchers can use computer simulations to find out if the weather conditions that cause storms are likely to occur. In one 2007 study, Purdue University climate researcher Robert Trapp found that in a climate change scenario considered likely by the Intergovernmental Panel on Climate Change, there would be increases in storm-friendly conditions in some areas, including the Southeast.

"We primarily saw that regions that already experience severe weather would see an amplification of the frequency" of those conditions, Trapp told LiveScience. The increase held regardless of season.

Estimating climate effects on tornadoes is particularly difficult, Trapp said, because they aren't as well recorded as other weather disasters such as hurricanes. Many of Wednesday's tornadoes occurred in daylight in populated areas, Trapp said, but nighttime tornadoes in rural spots may not get entered into the record. He and his colleagues are working to figure out the real trends using more objective numbers.

To show for certain that climate affects storms events, researchers will need to take that unbiased data and compare it across decades, Trapp said.

In the meantime, meteorologists are working to understand the conditions that trigger a tornado in a supercell. Researchers know the warning signs to look for, Weisman said, and they even know where tornadoes are likely to appear (the southwest flank of a storm, he said). But exactly what turns a given rotating storm into a tornado-spawning monster is still up in the air, Weisman said.

"A tornado is a very chaotic animal," he said. "Getting that last detail -- that last little step -- is very difficult."