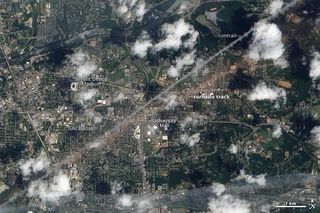 The weather this spring has been so severe ?historic flooding, extreme drought and record-breaking outbreaks of killer tornadoes ?that the last time any spring in the United States remotely looked like it was in 1927, according to scientists.

The death toll has been staggering, and the bulk of hurricane season still looms ahead.

A mix of climate patterns triggered these extreme events, scientists said during a briefing today (June 15).

"The reality is there usually isn't one single smoking gun," said Thomas Karl of the National Climatic Data Center.

One culprit was La Niña, a cyclical system of trade winds that cools the waters of the equatorial Pacific. (El Niño is La Niña's warm-water counterpart.) La Niña (Spanish for "the little girl") can muck with global weather patterns, recurring every few years and lingering for as long as two years. [Weirdo Weather: 7 Rare Weather Events ].

La Niña is gone now, but her slow exit along with a lingering reversal of atmospheric pressure patterns and wind direction in the North Atlantic, called the North Atlantic Oscillation appears to have been the big driver behind all the wild weather .

"The effects of La Niña were sort of muddled together with the effects of the enhanced North Atlantic Oscillation," said Ed O'Lenic of the Climate Prediction Center.

Some of the extremes seen this spring could be just a taste of what we might see in a future, warmer world ?though scientists do not tie particular events to climate change.

The floods were caused by heavy winter snows and torrential spring rains, driven by La Niña and the North Atlantic Oscillation. All that water ran into the two rivers, and the U.S. Army Corps of Engineers has been forced to release record amounts of water from the Missouri's reservoirs to cope with the flooding. As the Midwest continues to be soaked by rainstorms and parts of the snowpack have yet to melt, the Corps may find itself releasing reservoir water through mid-August.

Extreme floods could be a common sight in a warmer world, Karlsaid. The hotter that Earth's atmosphere gets, the more water it can hold; this could cause more intense rain and snow in certain parts of the world.

A warmer world is also expected to bring on more severe droughts, like those the Southwest has experienced this year, Karl said. More moisture in the air doesn't automatically mean extreme rain will fall everywhere.

"You need an atmospheric disturbance to wring that out of the air," Karl said.

An atmospheric disturbance a storm would be welcome in the Southwest today, because the region is in the middle of one of the driest years since recordkeeping began in the 1930s.

The 2011 tornado season is already one of the most active ever, due to a steep rise in twisters in April, the most tornado-filled April on record. It may end up as the biggest tornado month of all time after the counts are finished, said Harold Brooks of the National Severe Storms Laboratory.

The spike in tornadoes has turned this year into a blast from the past: Most of history's deadliest tornadoes hit during the early part of the 20th century, when tornado science was in its infancy and warnings were poor. Tornado season isn't over yet, and the year could finish as the second deadliest on record, Brooks said. It currently ranks fifth.

"That has made us look like the kind of year my grandpa would have thought of as a normal year growing up," Brooks said.

La Niña's exit around three months ago precipitated the tornado-producing conditions that held sway this spring. Its departure allowed the jet stream to go rogue, driving winds into the heart of the country and violently mixing cool and warm air masses, creating the thunderstorms that spawned the deadly tornadoes. Had La Niña stayed strong, the jet stream would have been farther north during the first few months of tornado season.

But this season is not necessarily a portent of those to come. Brooks isn't ready to blame the extreme tornado season on climate change, and doesn't see any reason to call this year a major shift toward more tornadoes.

"These are the kinds of years that happen on rare occasion and hopefully won't happen again for quite some time," Brooks said.