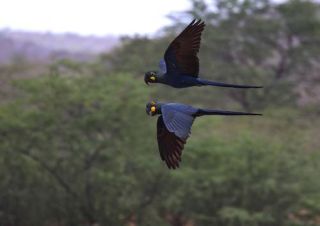 Another example of a conservation success story is the Lear's Macaw, found in Brazil. Named after the English poet, this spectacular blue parrot has increased four-fold in numbers as a result of a joint effort of many national and international non-governmental organisations, the Brazilian government and local landowners.
(Image: © Andy and Gill Swash; www.worldwildlifeimages.com/BirdLife International)

More species of birds than ever are threatened with extinction, an international conservation group announced today.

BirdLife International, which conducted the research for the IUCN (International Union for Conservation of Nature) Red List, found 1,227 species (12 percent of all bird species) are classified as globally threatened.

The IUCN Red List now lists 192 species of birds as Critically Endangered, the highest threat category before extinction, a total of two more than in the 2008 update. (Threatened species can also fall under the categories of Endangered, Vulnerable and Extinct in the Wild.)

"It is extremely worrying that the number of Critically Endangered birds on the IUCN Red List continues to increase, despite successful conservation initiatives around the world," said Simon Stuart, Chair of IUCN’s Species Survival Commission.

A recently discovered species from Colombia, the Gorgeted Puffleg (Eriocnemis isabellae), appears for the first time on the IUCN Red List. The puffleg, a flamboyantly colored hummingbird, has less than 5 square miles (12 square kilometers) of habitat remaining in the cloud forests of the Pinche mountain range in south-west Colombia and 8 percent of this is being damaged every year to grow coca.

The Sidamo Lark (Heteromirafra sidamoensis), from the Liben Plain of Ethiopia, has been moved from Endangered to Critically Endangered and is in danger of becoming mainland Africa’s first bird extinction due to changes in land use.

And coinciding with the 200th anniversary of Charles Darwin’s birth, one of the Galapagos finches, the Medium Tree-finch (Camarhynchus pauper), also becomes Critically Endangered, partly as a result of an introduced parasitic fly.

It's not just rare birds that are coming under pressure; more common ones are also threatened. In eastern North America, the Chimney Swift (Chaetura pelagica) is fast disappearing from the skies. Following continent-wide declines of nearly 30 percent in the last decade alone, this common species has been moved from Least Concern to Near Threatened.

But the news isn't all bad: Some conservation efforts are showing promise, and increased efforts could help save more bird species, conservationists said.

"In global terms, things continue to get worse — but there are some real conservation success stories this year to give us hope and point the way forward," says Dr Leon Bennun, BirdLife’s director of science and policy.

In New Zealand, for example, conservation efforts on behalf of the Chatham Petrel (Pterodroma axillaris) have downgraded the population from Critically Endangered to Endangered. The Mauritius Fody (Foudia rubra) has made the same leap.