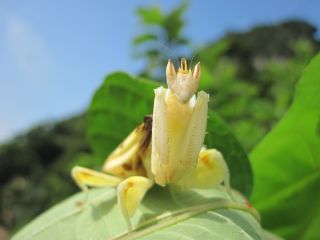 The orchid mantis, which resembles a flower, takes on this appearance in order to lure in prey, researchers say.

In fact, orchid mantises are even better at drawing in insects than some actual blossoms; they not only look like flowers, but they also beat the petally beauties at their own game, scientists added.

Nature presents many examples of organisms evolving to mimic other creatures. For instance, many butterfly species imitate the toxic monarch butterfly, presumably to deter predators from eating them.

A variety of animals impersonate plants, such as the stick insect, which resembles a twig. Several animals color themselves like flowers, such as flower crab spiders and ambush bugs, to camouflage themselves when attacking insects that approach the blossoms. [See Photos of Orchid Mantises & Other Plant Impersonators]

However, the orchid mantis has a full flowery disguise, complete with legs shaped like petals, that is convincing enough for scientists to suggest this hunter not only uses the masquerade to hide from prey, but also to attract victims. Examples of such aggressive mimicry have been seen before in the wild; for instance, one species of bolas spider is known to attract male moths by imitating female moth sex pheromones.

Scientists have championed the idea of the orchid mantis as an aggressive mimic since the 1800s; notably, it was first suggested by naturalist Alfred Russel Wallace, who, independent of Darwin, also conceived the theory of evolution through natural selection. However, this notion had never been confirmed, due in large part to how elusive the orchid mantis is, given how extremely rare it is even within its native habitat, the rainforests of Southeast Asia.

"The idea that the orchid mantis mimics a flower first came about over a century ago, but it was only ever just an idea — nobody had done the experiments to test whether it actually occurred," said study lead author James O'Hanlon, an evolutionary biologist at Macquarie University in Sydney, Australia. "Now, over a century later, we have textbooks and scientific articles stating that mantises mimic flowers as if it was an established fact. I felt it was my job to set the record straight and actually see whether this phenomenon was possible."

To test the idea, scientists ventured to Malaysia.

"The hardest part about this kind of research is that you are conducting research on an animal that nobody has ever researched before," O'Hanlon said. "We knew almost nothing about them and had to start from complete scratch."

The researchers first confirmed that the color of the orchid mantis was indistinguishable from 13 species of wild flowers in the areas the predator lived. Researchers tested the colors under the wavelengths of light visible to the flying, pollinating insects most likely to visit the blossoms, such as bees and butterflies.

The scientists also watched how wild pollinators behaved around live orchid mantises in the forest. Researchers saw more than a dozen instances of flying insects getting close enough to orchid mantises for the hunters to snatch the unsuspecting prey out of the air.

"We now know that not only is it possible for mantises to lure pollinators, but we know that they are amazingly good at it," O'Hanlon told LiveScience. "They can attract even more pollinators than some flowers.

"This is the only animal in the world that we know of that resembles a flower blossom to attract prey," O'Hanlon added. "There are other animals that are known to camouflage amongst flowers and ambush prey items, but they do not actually attract the pollinators themselves — the flowers they sit on are the attractive stimulus. The orchid mantis is unique in that the mantis itself is the attractive stimulus. This means the mantis can sit away from flowers, perhaps on leaves or bark, and still lure in pollinators."

O'Hanlon and his colleagues Gregory Holwell and Marie Herberstein will detail their findings in January in the journal American Naturalist.