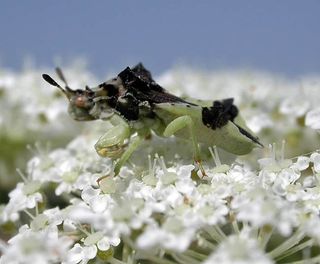 A male ambush bug (Phymata americana). Scientists now find male ambush bugs may use their dark patches to absorb light and heat up, thus improving their chances of having sex.
(Image: © David Punzalan)

Being hot can lead to more sex. Especially if you're a male ambush bug.

These predatory insects are known for camouflaging  themselves against flowers, lying in wait to ambush prey. The ambush bug (Phymata americana) is mostly yellow with dark brown or black patches, with the males possessing darker heads as well as thoraxes — the mid-regions of insects — than females.

Scientists now find male ambush bugs may use their dark patches to absorb light and heat up, thus improving their mating chances.

To figure this how, the researchers painted ambush bugs with thin coatings of yellow and black paint to confirm that darker colors led to hotter bugs. Next they had light- and dark-colored male bugs in lab chambers kept at either 64 degrees F (18 degrees C) or 80 degrees F (27 degrees C) — corresponding roughly to the morning and midday summer temperatures in Ontario, Canada where the ambush bugs were collected.

While both kinds of males had roughly the same chances of coupling with females at warmer temperatures, darker males succeeded more often when it was cool. The researchers speculate that a warmer body could help out the wing and leg muscles of the bugs, helping the males seek out females.

"Sex differences in color pattern are very common in the animal kingdom," researcher David Punzalan, an evolutionary ecologist at the University of Ottawa, told LiveScience. The fact these colors actually have a physical effect on the males "adds a different twist to an old story."

Punzalan and his colleagues detailed their findings online Dec. 18 in the Proceedings of the Royal Society B.