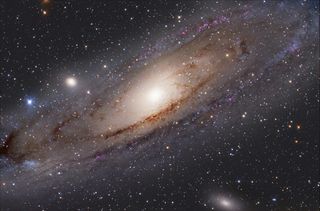 The Andromeda galaxy and everything else in the known universe, including us, could be part of an advanced simulation. Indeed, this is the most probable scenario, SpaceX CEO Elon Musk said on comedian Joe Rogan's podcast on Sept. 7, 2018.
(Image: © S. Ozime)

The universe is 13.8 billion years old, so any civilizations that may have arisen throughout the cosmos have had loads and loads of time to hone their technological know-how, the SpaceX founder and CEO explained early this morning (Sept. 7) during a long, wide-ranging and very entertaining appearance on comedian Joe Rogan's popular podcast, "The Joe Rogan Experience."

"If you assume any rate of improvement at all, then games will be indistinguishable from reality, or civilization will end. One of those two things will occur," Musk said. "Therefore, we are most likely in a simulation, because we exist." [13 Ways to Hunt Intelligent Aliens]

"I think most likely — this is just about probability — there are many, many simulations," he added. "You might as well call them reality, or you could call them multiverse."

The "substrate" on which these simulations are running, whatever it may be, is probably quite boring, at least compared to the simulations themselves, Musk further told Rogan.

The billionaire entrepreneur is far from alone in this interpretation; a number of physicists, cosmologists and philosophers find the simulation hypothesis compelling. If even one advanced alien civilization with a predilection for creating simulations has ever arisen out there, the reasoning goes, then it could theoretically pop off thousands — or perhaps even millions or billions — of "fake" universes. And it would be hard for the inhabitants of these digital realms to figure out the truth, because all the evidence they could gather would likely be planted by the creators.

Indeed, the simulation idea is one of many possible explanations for the famous Fermi paradox, which basically asks, "Where is everybody?" ("Everybody" being aliens, of course.)

This was far from the only ground that Musk and Rogan covered during their 2.5-hour conversation. For example, Musk reiterated his concerns about unregulated and uncontrolled artificial intelligence; stressed that a bright and appealing future for humanity involves exploring and settling other worlds, both in our solar system and beyond; and discussed the traffic-reducing potential of extensive tunnel systems, which his Boring Company aims to build in big cities around the world.

Musk also talked at length about Tesla, the electric-car company he runs, and the need for our species to wean itself off fossil fuels. Musk described humanity's mass displacement of carbon from the ground to the atmosphere (and from there into the oceans) as an incredibly dangerous experiment whose ultimate outcome is unknown.

"We should not do this," he told Rogan. "We know that sustainable energy is the end point. So why are we doing this experiment? It's an insane experiment. It's the dumbest experiment in human history." [Images of Melt: Earth's Vanishing Ice]

Musk also casually mentioned that he has an idea for an electric supersonic plane that takes off and lands vertically. But he said he doesn't view the development of this concept as a priority at the moment, given the other pressing problems humanity needs to solve.

Musk and Rogan sipped whiskey throughout their conversation. And at one point, the comedian lit up a joint, and Musk took a puff.

This was apparently a rare event; the SpaceX CEO said he almost never smokes marijuana (which is legal in California, where The Joe Rogan Experience is taped) and doesn't enjoy it, because it saps his famous productivity.

He told Rogan that ideas are bouncing around inside his head all the time — "it's like a never-ending explosion" — and that he realized he was different from other people when he was just 5 or 6 years old.

"I thought I was insane," Musk said. As a kid, he added, he worried that authority figures might notice his "strangeness" and put him away somewhere.

There was so much other interesting stuff as well. For example, Musk appreciatively handled a samurai sword in the studio that Rogan said was 500 years old. And at one point toward the end of the conversation, Musk said, "This may sound corny, but love is the answer." (Another choice quote: "I don't know what would happen if I got in a sensory-deprivation tank. Sounds concerning.")

You can watch the entire thing on The Joe Rogan Experience's YouTube page.