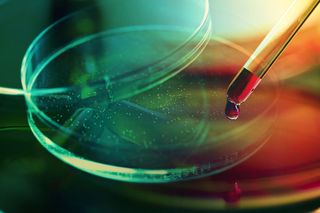 A cocktail of antibiotics might be more than the sum of its parts in the fight against drug-resistant bacteria. New research finds that mixing three to five types of antibiotics can increase effectiveness … sometimes.

More than 8,000 four- and five-drug combinations tested in the new study were more effective together than would have been expected based on their individual actions alone. Even so, "antagonistic interactions" — meaning that the combined drugs were less effective than expected — became more common when the number of drugs combined went up.

Studying how only two drugs combine to interact "is very complicated, so people haven't really looked at these higher-order interactions," said Pamela Yeh, a professor of ecology and evolutionary biology at the University of California, Los Angeles (UCLA) and a co-author of the study. [6 Superbugs to Watch Out For]

Still, it's unclear whether multidrug cocktails will be a real solution for infections that resist traditional antibiotic treatment. The research studied the antibiotics only in lab dishes, and it didn't ask important medical questions like how drug side effects might change depending on the number of antibiotics used.

Rather, the goal was to use bacteria and antibiotics as a tiny, controlled ecosystem to investigate how stressors interact, said study co-author Van Savage, also a professor of ecology and evolutionary biology at UCLA. In a real-world ecosystem, stressors might be a combination of things like precipitation, temperature changes, invasive species and more. In combination, any of these factors could affect the others, and the interactions aren't always intuitive, Savage told Live Science.

"It's easy to take things apart and study them," Savage said. "That makes sense as a thing to do. But when you put them together, you have to make sure you're putting them back together in the right way."

The researchers tested eight antibiotics: ampicillin, cefoxitin sodium salt, ciprofloxacin hydrochloride, doxycycline hyclate, erythromycin, fusidic acid sodium salt, streptomycin and trimethoprim. These were chosen because they all have different ways of attacking bacteria. All two-, three-, four- and five-drug combos were mixed with E. colibacteria in lab dishes at several different dosages, making for a total of 18,278 separate experiments.

In 1,676 four-drug cases and 6,443 five-drug cases, the antibiotics proved synergistic. The drugs killed bacteria more effectively than would have been expected if they were simply working side by side, not interacting.

The researchers had expected that the more drugs went into the mix, the less the add-on interactions would matter, Savage said. Essentially, they expected the first couple of drugs interacting would be the most important. But that's not what they saw.

"When you look at three, four or five drugs, there are new things that happen [that are different] than what you'd expect based on what you see in pairs," Savage said.

But more antibiotics weren't always better, even though they attacked the bacteria in different ways. As the number of drugs increased, Yeh said, so did the antagonistic interactions. As a result, some of the drug combinations performed worse than would have been expected based on the individual drugs alone.

Bacterial resistance is an important real-world problem, so Yeh said the researchers hope their work will have an impact in future medical research. Bacteria evolve defenses when exposed to antibiotics. The weakest strains get killed off, while resistant strains flourish.

Because of this phenomenon, the Centers for Disease Control and Preventionlists three drug-resistant bacterial strains that present an urgent threat to human health: Clostridium difficile, which can cause deadly colon inflammation; carbapenem-resistant Enterobacteriaceae, which primarily infects hospital patients and nursing home residents; and drug-resistant Neisseria gonorrhoeae, a sexually transmitted infection. Another dozen antibiotic-resistant bugs qualify as serious threats, according to the CDC.

The new study's findings are important, because they show that the effect of mixing antibiotics is not always intuitive, the researchers said. Combinations of drugs might be less effective than just one, or they might exceed expectations based on what would be expected from adding the effects of each together.

"We have to be really careful at any point where you're dealing with multiple stressors, because they are interacting, and they're not interacting exactly how we'd expect them to," Yeh said.

The findings were published Sept 3 in the journal npj Systems Biology and Applications.