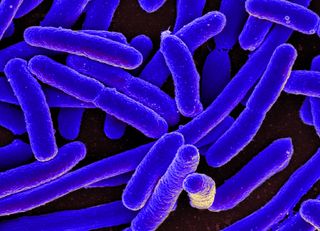 Some bacteria have finally breached the last wall of humans' antibiotic stronghold, according to a new study from China. In the study, researchers found a gene in one strain of Escherichia coli (E. coli) that protects these bacteria against one of the antibiotics considered to be a last resort.

Moreover, this gene is easily transferred among microbial species, raising the possibility of multiple epidemics that doctors would be unable to treat.

The results are "extremely worrying," study author Jian-Hua Liu, a professor at South China Agricultural University in Guangzhou, said in a statement. When bacteria become resistant to even the last-resort antibiotics and can share that resistance with other types of bacteria, that leaves the human population extremely vulnerable to a range of infections that would be unstoppable, he said. [6 Superbugs to Watch Out For]

In the study, the researchers found the gene, called mcr-1, in samples of E. coli that were taken from pigs, pork products and infected people. The gene protects the bacteria against an antibiotic called colistin.

Mcr-1 was most common in the samples taken from animals, suggesting that it originated in livestock, the researchers said. In China, colistin is widely administered to livestock.

Animals that are raised for people to eat are routinely given antibiotics to protect the livestock against infection, and to stimulate their growth. But the constant presence of antibiotics in the livestock diet helps drive the increasing numbers of antibiotic resistant bacteria today, researchers say.

Colistin isn't a recent addition to the drug arsenal. It was discovered in 1947, and was used widely through the 1960s, but the drug had toxic effects on the kidneys and nervous system, said Dr. William Schaffner, an infectious disease specialist and professor of preventive medicine at Vanderbilt University Medical Center in Nashville, Tennessee.

Doctors mostly abandoned colistin after newer and safer antibiotics came along, said Schaffner, who was not involved in the new study.

But sitting on the shelf for decades is exactly what kept colistin viable in the battle against drug-resistant bacteria, Shaffner said. Because microbes had little exposure to colistin, they did not have much opportunity to evolve protection against it. As the list of effective antibiotics has shrunk, colistin has remained one of the last reliable lines of defense against bacterial infection.

That is, until now. In the new study, the researchers found the gene for colistin resistance in bacterial structures called plasmids, which are small circles of DNA that are easily passed from one bacterium to another, and even between different bacterial species.

Researchers have long known that the use of antibiotics, in both agriculture and in medicine, has encouraged bacteria to do what they've excelled at for more than 3 billion years: evolve and survive.

"Our ability to make new antibiotics will always be outpaced by the ability of bacteria to devise resistance mechanisms," said Dr. Amesh A. Adalja, an infectious disease specialist and senior associate at the University of Pittsburgh Medical Center's Center for Health Security. [7 Devastating Infectious Diseases]

Bacteria are very, very good at protecting themselves, said Adalja, who was not involved in the study. For billions of years, bacteria have been fine-tuning defenses against other microbes that could harm them. Since many antibiotics are derived from microorganisms, when doctors use these drugs against bacteria, "we're playing in their field," Adalja added, presenting them with an opponent that evolution has primed them to defeat.

The new drug-resistant bacteria have not been found outside of China, the investigators said. But the researchers warned there is a strong possibility this drug-resistance gene could spread, and they called for "very close internal monitoring and surveillance" of the gene, in both human and animal medicine, and for evaluating the continued use of colistin and related antibiotics.

"We are already facing an antibiotic winter that resembles the pre-antibiotic era," Schaffner warned. "We infectious-disease doctors are in the very uncomfortable position of having to try to treat an infection where the bacteria is resistant to so many antibiotics. In essence, we don't have any more bullets left in our gun," he said.

Right now, preventing bacterial infections with measures such as vaccinations and good hand hygiene are more vital then ever, Schaffner stressed. He noted that antibiotics are useful only against bacterial infections, and that taking antibiotics when they're not needed just gives bacteria another chance to beef up their drug-resistant defenses.

But the best hope for defeating infection-causing bacteria may require overhauling today's approach to fighting disease, to make people less dependent on treatments that bacteria are likely to defeat, Adalja told Live Science.

Although antibiotics may still be useful, doctors might be better served by diversifying their tactics, using more targeted therapies against bacteria, like "attack viruses" known as bacteriophages, or developing new preventative measures, he said.

"There's a whole host of approaches, these next-generation or novel therapies that move us beyond antibiotics," Adalja said.

The findings were published online Nov. 18 in the journal The Lancet Infectious Diseases.