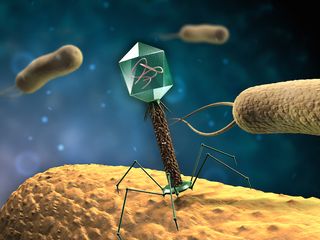 In this artist's drawing, a phage injects its genetic material into a bacterium.
(Image: © Andrea Danti/Shutterstock.com)

Viruses that are harmless to humans might help fight the deadly scourge of bacteria that can't be treated with antibiotics, researchers say.

These viruses could be used in hand sanitizers, and to treat exposed surfaces in hospitals, which are hotbeds of antibiotic resistance, the researchers noted in a new study.

"We managed to construct a system that restores antibiotic sensitivity to drug-resistant bacteria,"said study co-author Udi Qimron, a molecular biologist at Tel Aviv University in Israel.

It's necessary to find new ways to fight bacteria because, although antibiotics kill off many germs that have no resistance against them, they also prompt the spread of microbes that are resistant to the drugs. The use and misuse of antibiotics have led to the evolution of microbes that are resistant to many of the most common drugs intended to kill harmful bacteria.

At least 2 million Americans are infected by drug-resistant germs every year, and at least 23,000 die as a result, according to a 2013 report from the Centers for Disease Control and Prevention. [6 Superbugs to Watch Out For]

Now, instead of attacking bacteria with new antibiotics that the microbes could evolve to resist over time, some researchers are investigating the use of bacteria-killing viruses known as bacteriophages, or phages for short. These natural enemies of bacteria do not infect humans.

One potential drawback of using phages to combat bacteria has been that bacteria could evolve to become resistant to phages, just as antibiotic use has led to resistance to the drugs. But now, scientists in Israel say they may have developed a strategy to avoid this problem.

The researchers developed two kinds of phages against E. coli, a bacterium normally found in the human gut. One kind, called the lytic phage, simply killed E. coli. The other kind, dubbed the temperate phage, injected the bacteria with DNA that had two effects: It protected them against the lytic phage, making them 20 times more resistant to its lethal effects, but also disrupted the antibiotic-resistance genes in the microbes, making them sensitive to drugs called carbapenems, which are often the last line of effective antibiotics against resistant bacteria.

The result was that the bacteria were left vulnerable to carbapenems. The researchers added that their strategy could be used to make bacteria sensitive to virtually any kind of antibiotic.

Whereas other strategies that involve using phages to fight bacteria typically require the delivery of the viruses into a patient's tissues, this new strategy does not. "We believe that the system could eventually be used on hospital surfaces and in hand disinfectants, and thus significantly reduce infections by antibiotic-resistant bacteria," Qimron told Live Science.

One remaining weakness of phage therapy, however, is that each virus has a very narrow range of targets; most phages infect just one species of bacteria, and some are even limited to a few strains within a species. To overcome this obstacle, the researchers suggested the development of mutant phages that could infect many bacterial strains and species, or the use of mixtures of phages that target a range of strains and species.

The scientists detailed their findings online today (May 18) in the journal Proceedings of the National Academy of Sciences.