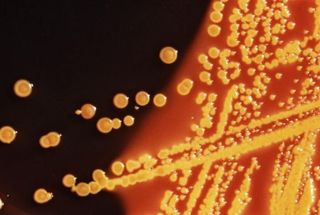 The bug that causes potentially deadly staph infections in hospitals can survive for weeks on a bed sheet or a computer keyboard, a new study finds.

Staph is the most common hospital-born infection in the United States. Consequences range from mild discomfort to death.

The bacterium is one of several emerging "superbugs" that are increasingly difficult to control with conventional drugs because they've evolved a resistance to antibiotics. Recent studies have shown MRSA is cropping up outside hospitals at an increasing rate.

"The potential of MRSA to be transferred from person to person, in large part, depends on its ability to survive on environmental surfaces," said Kris Owens of Ecolab, Inc. in Mendota Heights, Minnesota.

In the study, two strains of MRSA were placed on various types of surfaces. The researchers found detectable levels of the organism on acrylic fingernails after eight weeks, on computer keyboard covers after six weeks, and on bed linen after vive days.

The research was presented today at the 105th General Meeting of the American Society for Microbiology.

"The results of this study clearly demonstrate the need for frequent hand washing and environmental disinfection in health care settings," Owens said.