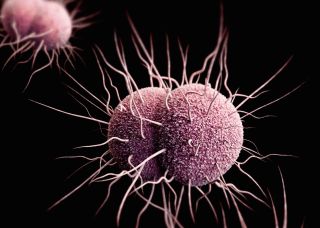 This illustration shows a computer-generated image of drug-resistant Neisseria gonorrhoeae, the bacteria that cause gonorrhea.
(Image: © CDC/James Archer)

A man in the United Kingdom caught an STD with a dubious distinction: It could be the "worst ever" case of antibiotic-resistant gonorrhea that doctors have seen.

The man's infection is resistant to the two antibiotics recommended as the first-choice treatment for gonorrhea, called azithromycin and ceftriaxone. This is the first report in the world of a case of gonorrhea that's resistant to both of these antibiotics, according to researchers at Public Health England, the U.K. health agency investigating the case. The World Health Organization and the European Centre for Disease Prevention and Control agreed that the case is a first, according to the BBC.

The man acquired the infection from a sexual encounter with a woman in Southeast Asia, the BBC reported.

Doctors have warned for years about the risk of antibiotic-resistant gonorrhea, as this STD is increasingly developing resistance to all of the drugs available to treat it.

The U.K. man is currently being treated with an antibiotic called ertapenem, and preliminary tests suggest it may be working, researchers at Public Health England said. Doctors will follow up with the man next month to determine whether the treatment was successful, according to the BBC.

An investigation is still underway to determine if any other people caught this infection, but so far, no other cases have been reported.

Gonorrhea is caused by the bacterium Neisseria gonorrhoeae and is spread through sexual activity. Individuals with gonorrhea often show no symptoms, but the disease can lead to serious complications, including infertility and chronic pelvic pain in women. In men, it can cause epididymitis, a painful condition of the ducts attached to the testicles that may cause infertility if left untreated, according to the Centers for Disease Control and Prevention.

If the bacteria spread to the blood or joints, the condition can be life-threatening, the CDC says.