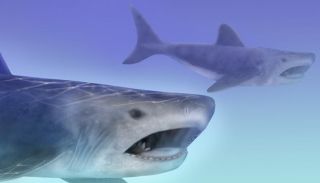 There's a new face at the Idaho Museum of Natural History — or at least, that face's fossilized arsenal of radial murder-teeth.

According to a statement from Idaho State University (ISU), the museum has been bequeathed a brand-new set of fossilized choppers belonging to the extinct Helicoprion — an ancient cartilaginous fish nicknamed the "buzz saw shark" for reasons that become obvious when you see artist renderings of its  straight-out-of-shop-class teeth.

The fossil, which was discovered at a Monsanto mine, measures over 8 inches (20 centimeters) in diameter, or slightly smaller than an NBA basketball. The sizable tooth whorl indicates that this ancient fish could grow to nightmarishly huge proportions — perhaps up to 25 feet (7.7 meters) long, museum researchers said.

"Our studies on Helicoprion show it was the largest predator on Earth at the time, nearly 270 million years ago," Leif Tapanila, an ISU professor and director of the Idaho Museum of Natural History, said in a statement. "Idaho is the best place on the planet to find these amazing fossils."

The buzz saw shark was a freaky ancestor of the modern-day ratfish (or "ghost shark") that went extinct about 225 million years ago. Fossils of its unorthodox whorl jaw, which resemble spiral shells tipped with fangs, have baffled researchers for more than a century, tricking some early paleontologists into dismissing the jaws as ammonite fossils, according to Ars Technica. Later, researchers imagined the whorl as part of a spiky, elephant-trunk-like appendage, or a dorky, protruding tongue plopping out of the shark's massive mouth. [25 Amazing Ancient Beasts]

A 2013 paper in the journal Biology Letters co-authored by Tapanila studied computed tomography (CT) scans of fragmented Helicoprion skull fossils to finally determine the whorl's purpose. The researchers found that the mysterious spiral of teeth did not curl outward, as previous researchers had predicted, but rather grew  inside the fish's lower jaw like a "partly concealed tooth factory," Scientific American reported at the time.

As new teeth grew in the back of the fish's mouth, the entire whorl rotated forward to make room for the teeth. Eventually, old teeth at the front of the mouth curled inward and tucked into the fish's lower jaw in a spooky spiral pattern. Some fossils show up to 150 teeth in a single whorl, Tapanila and his colleagues wrote.

So much the better, because the buzz saw shark had no teeth in its upper jaws at all. With this single row of radial, razor-sharp teeth, the sharks likely dined on mostly soft-bodied animals like cephalopods, Tapanila and his colleagues wrote in the 2013 paper.

The Idaho Museum of Natural History is America's foremost repository of Helicoprion fossils. The new fossil will go on display as part of the museum's "Buzzsaw Sharks of Idaho" exhibit, which has been touring for five years and will return to Idaho in October, the museum said.