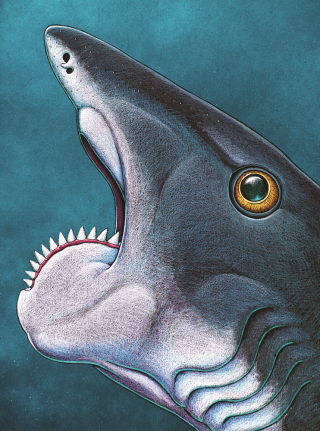 An ancient sea predator had a spiraling whorl of teeth that acted as a lethal slicing tool, according to new scans of a mysterious fossil.

Helicoprion was a bizarre creature that went extinct some 225 million years ago. Like modern-day sharks, Helicoprion had cartilaginous bones rather than calcified ones, so the only traces it left in the fossil record were weird, whorl-like spirals of teeth that look quite unlike anything sharks sport today.

The dearth of fossil evidence has led to multiple attempted reconstructions of what Helicoprion would have looked like. In some, the tooth whorl is placed on the upper jaw, curling outward like a spiky elephant trunk. In others, it's on the lower lip, giving the fish a fearsomely pouty expression. Researchers have also debated whether Helicoprion was more like a modern shark or another ancient group of cartilaginous fish, the chimaera. [25 Amazing Ancient Beasts]

Now, a team of researchers from led by Leif Tapanila of Idaho State University has scanned a tooth whorl fossil from the Idaho Museum of Natural History using computed tomography (CT), the same type of technology used for disease screening in medicine. This technique provides a more detailed look than ever before at the tooth whorl, revealing the only way the whorl would've fit into the creature's mouth is if it took up Helicoprion's entire lower jaw and grew continuously in a spiral, curling under itself like a conveyer belt of teeth. Previous reconstructions pictured the spiral as an appendage on the tip of the jaw, the researchers wrote Tuesday (Feb. 26) in the journal Biology Letters.

The scanned specimen, found in Idaho in 1950, dates back about 270 million years. It's about 9 inches (23 cm) in diameter, about half the size of the largest tooth whorls ever found. For comparison, the diameter of a regulation men's basketball is just over 9 inches.

When Helicoprion bit down on prey, the tooth whorl would have been forced backward, slicing and dicing the meal and moving it down toward the throat. Few Helicoprion fossils show signs of tooth breakage, suggesting that the fish likely ate soft-bodied animals such as squid.

The anatomy of the jaw also confirms that Helicoprion belonged to a group called the Euchondrocephali, a Greek word meaning "three cartilaginous heads," for the way their jaws fuse. These fish share characteristics of both cartilaginous sharks and bony fishes. That makes Helicoprion a distant relative of today's rabbitfish, ratfish and other chimaeras.