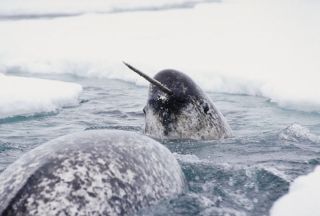 For hundreds of years the purpose of the tusk on the narwhal, or "unicorn" whale, has stumped scientists and Inuit elders alike. It is an evolutionary mystery that defies many of the known principles of mammalian teeth.

A new study suggests the whales use their tusks to determine the salinity of water and search for food. And males may rub them together for as-yet unknown sensations.

Narwhals range from 13 to 15 feet and weigh between 2,200 and 3,500 pounds. Many have an eight-foot-long tooth, or tusk, emerging from the left side of the upper jaw. The tooth's unique spiral, the degree of its asymmetry to the left side, and its odd distribution among most males and some females are all unique expressions of teeth in mammals.

After four trips to the Canadian High Arctic to study these whales, Martin Nweeia of the Harvard School of Dental Medicine has discovered that the narwhal's tooth, while seemingly rigid and hard, has remarkable sensor capabilities. With ten million tiny nerve connections tunneling from the central nerve of the tusk to its outer surface, the thing is like a membrane with an extremely sensitive surface and can detect changes in water temperature, pressure, and particle gradients.

Because these whales can detect particle gradients in water, they can discern the salinity of the water, which could help them survive in their Arctic ice environment. They can also detect water particles that hint at the fish that make up their diet.

There is no known comparison in nature and certainly none more unique in tooth form, expression, and functional adaptation.

"Why would a tusk break the rules of normal development by expressing millions of sensory pathways that connect its nervous system to the frigid arctic environment?" Nweeia said. "Such a finding is startling and indeed surprised all of us who discovered it."

In the past, scientists have presented many theories to explain the tooth's purpose and function, although none of these have been accepted as definitive. One of the most common is that the tooth is used to display aggression between males, who joust with each other for social hierarchy. Another is that the tooth is a secondary sexual characteristic, like a peacock's feathers or a lion's mane.

The findings point to a new direction of scientific investigation. The tusk is also sensitive to touch, and narwhals are known for their "tusking" behavior, when males rub tusks with each other. Because of the tactile sensory ability of the tusk surface, the whales are likely experiencing a unique sensation.

"Now that we know the sensory capabilities of the tusk, we can design new experiments to describe some of the unique and unexplained behaviors of this elusive and extraordinary whale," Nweeia said.

Because of their physical structure, the tusks are both strong and flexible—an eight-foot-long tusk can yield one foot in any direction without breaking. For this reason, researchers are currently investigating narwhal tusks for practical insight into ways of improving restorative dental materials.