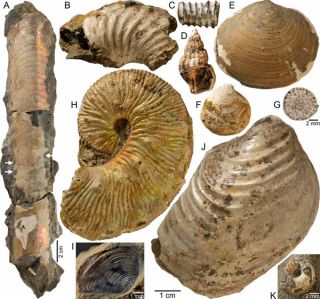 Fossils of extinct, free-swimming mollusks called ammonites found at the site of 74-million-year-old methane seep at the bottom of Western Interior Seaway in what is now South Dakota.
(Image: © AMNH\S. Thurston)

Fossils found in a South Dakota cliff have revealed that ancient, free-swimming shelled creatures called ammonites were permanent residents around a methane seep at the bottom of the inland sea that divided the North American continent more than 65 million years ago.

Methane and other chemicals, such as hydrogen sulfide, leak from the ocean floor at so-called cold seeps, providing the basis for a food chain and an oasis for life on the seafloor.

Researchers had assumed that ammonites, extinct relatives of squid and nautiluses, simply passed through these communities at the bottom of the ancient sea. However, an examination of the fossils found around a 74-million-year-old seep indicated that the animals spent their entire lives there. In addition to analyzing the chemistry of the shells, the researchers found fossils of both adult and juvenile ammonites.

Bacteria feeding off the methane and sulfur emitted at a seep would have attracted tiny floating organisms called plankton, and these, in turn, would have attracted hungry ammonites, writes the research team led by Neil Landman, a paleontology curator at the American Museum of Natural History.

The food chain didn't stop with the ammonites, the team believes.

"The presence of lethal injuries on ammonite shells, possibly inflicted by fish, further testifies to the fact that ammonites formed an integral part of an interwoven community," they write in the journal Geology.

This fossil deposit was once part of the Western Interior Seaway, which divided the continent of North America during the Cretaceous Period that ended about 65 million years ago. Seeps on its floor appear to have once attracted bivalves, sponges, fish, crinoids and ammonites, Landman said.