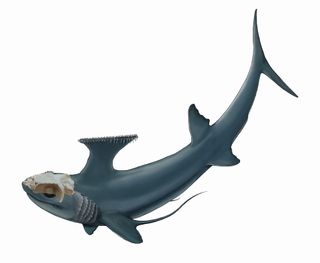 An artist's interpretation of Dwykaselachus oosthuizeni, a type of symmoriid shark now known to be an early chimaera.
(Image: © Kristen Tietjen)

A 280-million-year-old skull of a so-called ghost shark has helped researchers determine exactly how chimaeras — mysterious, mostly deep-sea fish with wing-like fins and pointy snouts — are related to sharks, a new study finds.

The ancient skull, belonging to the 4-foot-long (1.2 meters) shark-like fish Dwykaselachus oosthuizeni, was a rare find, as this animal's skeleton is made of cartilage, which rarely fossilizes, the researchers said. An anatomical examination showed that the animal had a surprising number of similarities to modern chimaeras — also called ghost sharks for their silvery white exterior and overall appearance — suggesting that the two types of creature are related, the researchers said.

"Chimaeras are ancient specialists, now anchored within a large and very distinctive group of early shark-like fishes that thrived in the late Paleozoic era," said the study's lead researcher Michael Coates, a professor in the Department of Organismal Biology and Anatomy at the University of Chicago. "We now have a glimpse of the preconditions from which modern chimaeras evolved, suggesting that the large eyes of these early sharks predisposed chimaeras for low-light, deep-sea habits." [Photos: The Freakiest-Looking Fish]

Little is known about chimaeras, which are also called ratfish. Scientists aren't sure what chimaeras eat, how long they live or how often they reproduce. But based on chimaeras that have washed ashore or been caught as bycatch, researchers know that these fish have cartilaginous skeletons, indicating that the mysterious animals are related to sharks and rays, which also have cartilaginous bodies.

But beyond that, the chimaeras' evolutionary origins were a real mystery, the researchers said.

However, Coates had an inkling that a fossil in South Africa could help solve the mystery, he said. Roy Oosthuizen, an amateur fossil collector, discovered the specimen on his farm in Cape Province, South Africa, in the 1980s, and it had stayed at the South African Museum in Cape Town ever since.

The specimen had been described on a rudimentary level, but Coates wanted to learn more about it, so he asked his colleague and co-author Rob Gess, of the South African Centre of Excellence in Palaeosciences, to examine it.

Gess used a micro computed-tomography (CT) scanner (which produces more detailed images than a regular CT scanner) to create a virtual 3D image of the skull and its braincase, the area where the brain sat.

Intriguingly, some of D. oosthuizeni's braincase structures, including its major cranial nerves, nostrils and inner ear resembled those seen in modern chimaeras, the researchers found.

For instance, "in all modern sharks and rays, the cartilage roof of the skull is open at the front," Coates told Live Science in an email. "But in chimaeras and Dwykaselachus, this roof is closed. And further details of the labyrinth of tubes and ducts that contain the semicircular canals of the inner ear are also shared."

The discovery indicates that the evolutionary lineage leading to chimaeras is rooted deeply within this group of early shark-like fishes, of which Dwykaselachus is a late, but anatomically conservative, representative, Coates said.

"For many years, the relationship of modern chimaeras to the early fossil record of sharks has been a puzzle," Coates said. Now, researchers know that D. oosthuizeni was an early chimaera, he said.

"Dwykaselachus allows us to connect the pieces and provides a time point for divergences, splits between major vertebrate groups in the tree of life," Coates said.

The study was published online today (Jan. 4) in the journal Nature.