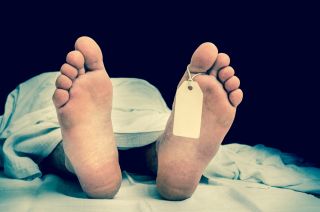 You don't need to be alive for your microbiome to be useful to science.

After years of studying the populations of bacteria on living people, researchers are now turning their sights on the dead. And they're finding that the "postmortem microbiome" is useful not only for forensic investigations, but also for understanding the health of large communities of people, and this could benefit the living. [5 Ways Gut Bacteria Affect Your Health]

In a new study, published today (April 10) in the journal Nature Scientific Reports, researchers found that a person's postmortem microbiome could predict certain health conditions, such as heart disease. This means that studying the postmortem microbiome may help researchers survey the public's health, which "could be an effective tool for assessing the health of living populations," lead study author Jennifer Pechal, a forensic entomologist and microbial ecologist at Michigan State University, said in a statement.

In the study, researchers analyzed the postmortem microbiome of 188 cases seen at the Wayne County Medical Examiner's Office in Detroit.

The researchers also found that the postmortem microbiome tended to change over time. It was relatively stable for the first 48 hours after a person died, but then showed marked changes, such as a reduction in the overall diversity of bacteria found.

"The microbial stopwatch, as it has been recently called, is a telling timepiece that can assist us in determining when someone died," said study co-author Eric Benbow, also a forensic entomologist at Michigan State University. After death, a person's microbiome is different after two days, Benbow said.

In the future, analyzing the microbiome after death might help researchers survey the population's health, particularly in areas that are underserved and understudied by the medical community, the scientists said.

"As this and future data sets expand, it is conceivable that resulting data from the postmortem microbiota could provide insights into the health of the community and even public health intervention if warranted," the researchers wrote in their paper.