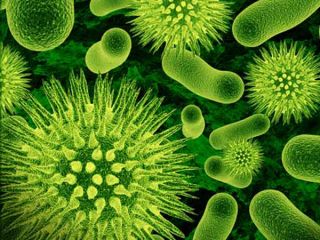 A microscopic view of bacteria

Congratulations! You actually weigh a few pounds less than you thought! Scientists have discovered that several handfuls of bacteria, fungi and other microbes live in and on each of our bodies, collectively composing 1 to 3 percent of our body mass. If you're a 200-pound person, up to six pounds of you are not you, but them.

That's the new finding of researchers working on a collaboration called the Human Microbiome Project. Their first-ever census of the microbial life harbored by humans reveals that healthy people share their bodies with around 10,000 species.

Many of these organisms perform such benevolent duties as cleaning our skin and helping us digest food. Some do nothing much. More mysteriously, the scientists found that nearly everyone harbors low levels of some harmful types of bacteria, too. In healthy people, these pathogens quietly coexist alongside the benign and helpful microbes. It isn't yet known what provokes them to turn infectious.

According to the Chicago Tribune, the scientists found that we are each like miniature versions of the world as a whole, hosting a different set of species in or on each of our body parts. To their surprise, they also discovered that every person's microbiome is unique. The stuff on my arm is different than the stuff on yours, for example (though both serve similar functions).

As Curtis Huttenhower, a Harvard biostatistician and member of the Human Microbiome Project, put it on Science Friday, "Everyone is a snowflake with respect to the microbiome."