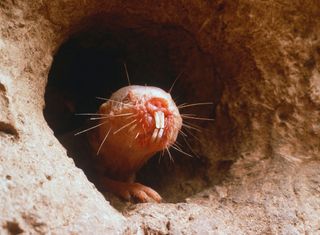 Just when it seemed the naked mole rat couldn't get any weirder, it turns out the buck-toothed, bare-skinned rodents don't even age.

Unlike literally every other mammal, naked mole rats don't become more likely to die as they get up there in years. In humans, for example, with all else being equal besides age, a person's risk of dying doubles every 8 years after age 40. For naked mole rats (Heterocephalus glaber), there is no increase in the risk of death even when the rats are 25 times older than the onset of sexual maturity.

"It doesn't matter how old you are," said Rochelle Buffenstein, a senior principal investigator at Calico Life Sciences LLC, a research company in San Francisco. "Your death is random." [Extreme Life on Earth: 8 Bizarre Creatures]

Naked mole rats are famously wrinkled rodents, native to East African deserts. They live in colonies underground, headed by a queen who does all the breeding, by mating with just a few males at any given time. The animals' biology is downright weird. They can live without oxygen for up to 18 minutes without ill effect, by switching over to metabolizing fructose instead of the more usual glucose. They almost never get cancer. Their sperm is of "dismal" quality, according to one researcher, yet they are still perfectly fertile. And they live bizarrely long, over 30 years in captivity and up to 17 years in the wild. Based on their size, naked mole rats should live about 6 years in cushy conditions, just like lab mice. Now, it seems their lack of normal aging might help explain their longevity.

Naked mole rats aren't immortal, of course; they do eventually die. The pattern by which they die, though doesn't seem to be related to how many years they have under their belts. Instead, when Buffenstein and her colleagues graphed out the mortality of naked mole rats through time, they saw a pattern that looks like the exponential decay of a radioactive material: constantly declining by the same proportion of the overall number. In exponential decay, scientists talk about the concept of a "half-life," when half of the original material is left. For nonbreeding naked mole rats in captivity, Buffenstein and her team calculated, the half-life of a group would be 19 years.

The researchers based their findings on 3,329 naked mole rats living in colonies in their research facility over more than 30 years. They found that on any given day, an average rat's chances of dying were 1 in 10,000. (Most naked mole rats never breed, but the small proportion of rats that do breed fared even better, said study co-author J. Graham Ruby, a Calico principle investigator.

"The chance of a mole rat dying at one year of age or dying at 25 years of age is the same," Buffenstein told Live Science. It would be like if humans were equally likely to die at 30 as at 90, she said.

Naked mole rats don't go through menopause, so they're able to breed even at advanced age. [Do Animals Have Menopause?]

Naked mole rats generally don't get many chronic diseases that become familiar to humans as they age, like diabetes or Alzheimer's, Buffenstein said. In the wild, the animals might die by predator attack or from starvation, infection or lack of water, she said. In the lab, the cause of death is usually hard to find; the main issue that shows up in necropsies, Buffenstein said, are mouth sores, indicating the animals weren't eating, drinking or producing saliva well in their last few days and infection set in.

"We really don't know what's killing them at this point," Buffenstein said.

Buffenstein and her team are deeply interested in figuring out why naked mole rats seem immune to the normal ravages of age. Other studies have turned up some possible molecular tricks that explain the phenomenon. For example, naked mole rats produce a unique form of a protein called hyaluronan. This protein form, HMW-HA, seems to have anti-cancer properties, according to 2013 research. A 2009 study suggested that the animals also maintain the integrity of their proteins throughout their lives. Their bodies also seem to protect their genomes from damage and clear away cellular mutations rapidly, Buffenstein said.

"It is our absolute belief that when we find out what these mechanisms are, they will give rise to interventions that could abrogate the aging process in humans," she said.