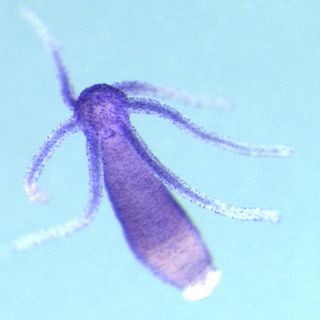 In ancient Greek myth, the Hydra was a multi-headed monster that grew two more heads for every one that it lost. As it turns out, the real-life animal named after this mythical beast may be even more tenacious.

Unlike most multicellular species, hydra don't show any signs of deteriorating with age, according to the new research, published Dec. 7 in the journal Proceedings of the National Academy of Sciences. [From Methuselah to Elves: The Top 10 Immortals]

"I started my original experiment wanting to prove that hydra could not have escaped aging," study researcher Daniel Martinez, a Pomona College biologist, said in a statement. "My own data has proven me wrong — twice."

Hydra are a group of invertebrates that look like tiny tubes with tentacles protruding off one end. They grow only about 0.4 inches (10 millimeters) long and eat even tinier aquatic animals.

Hydra are known for their regenerative capabilities. Most of their body cells are stem cells, Martinez said. These cells are capable of continuous division and differentiation into any cell type in the body. In humans, such "totipotent" cells are present only in the first few days of embryonic development. Hydra, by contrast, constantly renew their bodies with fresh cells.

In 1998, Martinez and his colleagues published a study describing how they found no signs of aging in mature hydras over four years. To detect aging, researchers look at senescence, which is defined as an increased rate of death and a decline in fertility with greater age. In that 1998 study, researchers couldn't pin down whether or not hydra fertility declined with age.

The new research involved creating little islands of paradise for 2,256 hydras. The researchers wanted to give the animals ideal conditions, which meant giving each an individual dish, with the water changed thrice weekly, plus meals of fresh brine shrimp.

Over eight years, the researchers found no evidence of senescence in their coddled hydra. Death rates held constant at one per 167 hydras per year, no matter their age. (The "oldest" animals studied were clones of hydras that had been around for 41 years — though individuals were only studied for eight years, some were biologically older because they were genetic clones.)  Likewise, fertility remained constant for 80 percent of the individual hydras over time. The other 20 percent fluctuated up and down, likely because of laboratory conditions.

"I do believe that an individual hydra can live forever under the right circumstances," Martinez said.

In the wild, disease, predators and water contamination kill off hydras before they can achieve immortality. But the findings fly in the face of old models that assumed that all animals must decline with age, Martinez said. And that means that studying hydra could help scientists unravel the mystery of why most animals do age.

"I’m hoping this work helps sparks another scientist to take a deeper look at immortality," Martinez said, "perhaps in some other organism that helps bring more light to the mysteries of aging.”