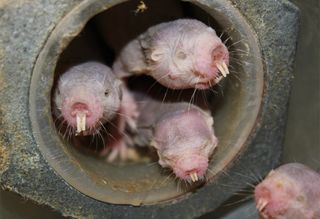 When oxygen levels get low, naked mole rats act like plants. Unlike every other mammal, they can metabolize the plant sugar fructose to avoid brain damage.
(Image: © Thomas Park/UIC)

This hairless social mammal almost never gets cancer and has high levels of a brain-boosting protein that may explain why it lives up to 10 times longer than a regular rat. Now, new research finds that naked mole rats can also live up to 18 minutes without oxygen and suffer no lasting effects.

"Our work is the first evidence that a mammal switches to fructose as a fuel," Gary Lewin, a physiologist at the Max Delbrück Center for Molecular Medicine at the Helmholtz Association in Berlin, said in a statement.

No air, no problem

The naked mole rat (Heterocephalus glaber) is famously odd-looking, with bald, wrinkled skin and buck teeth that protrude from its lips so it can use them to dig without getting a mouthful of dirt. These east African natives live in underground burrows in large social groups.

"The air can get very stuffy in these underground burrows," Lewin said.

But the low oxygen levels don't seem to faze the mole rats. When oxygen gets low in rat burrows, the animals sometimes laze around in a sort of metabolic trance, but they soon get up and start running around again. Lewin and his colleagues wanted to know why.

The team analyzed tissue, blood and metabolites, the small molecules formed from metabolic reactions inside cells. They found that, when oxygen is plentiful, naked mole rat metabolism looks just like the metabolism of mice (and, for that matter, humans): The animals split glucose molecules to release energy and kick off the process of aerobic respiration.

When oxygen gets scarce, mice and humans are in trouble: There's no way to continue aerobic respiration without it. But naked mole rats have an ace in the hole, Lewin and his colleagues found. They have high levels of a transporter molecule called GLUT5 as well as an enzyme called KHK. In combination, the transporter and the enzyme allow the rats to use fructose, instead of glucose, for energy — a molecular process that is anaerobic, meaning it doesn't require oxygen.

For naked mole rats digging miles-long burrows, temporarily switching to anaerobic respiration can be lifesaving. Lewin and his colleagues hope the findings might eventually save human lives, too.

"Patients who suffer an infarction or stroke experience irreparable damage after just a few minutes of oxygen deprivation," Lewin said. If doctors could genetically switch on a fructose-metabolizing pathway in the brain or heart during a stroke or heart attack, they might be able to protect brain tissue until the oxygen supply could be re-established.

The research is detailed in the April 21 issue of the journal Science.