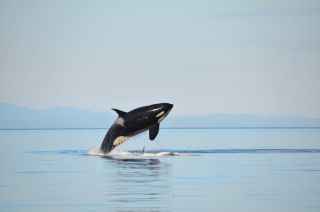 Female killer whales reproduce between the ages of 12 and 40 years but can survive into their 90s.
(Image: © Monika Wieland Shields/Shutterstock)

Human women typically go through menopause between ages 45 and 55, when they undergo hormonal changes that cause them to stop being able to reproduce. But they're not the only ones in the animal kingdom who live beyond their reproductive years.

Scientists have long known that animals' fertility and reproductive success slowly decline with increasing age — a phenomenon called reproductive senescence. But, for the most part, reproduction in animals seems to continue up to old age and death, though at a diminished capacity.

In a recent review of primate species, researchers found that humans are the only primates that don't die within a few years of "fertility cessation." And this is true even when modern medicine and health care are taken out of the equation, as the study included data from the hunter-gatherer !Kung tribe in the Kalahari Desert.

In the past couple of decades, however, numerous studies have claimed that menopause, or "post-reproductive life spans" — a phrase that most often refers to the age of last reproduction, since changes in ovulation and hormones related to menopause are difficult to measure in wild animal populations — occurs in a wide range of species. Guppies, for instance, appear to go through a fish version of menopause, according to one study, which found that the fish spend an average of 13.6 percent of their total life spans in a post-reproductive stage.

In fact, such "menopause" appears somewhat common among fish, birds, mammals and invertebrates (animals without backbones), according to a recent review on the topic published in July 2015 in the journal Trends in Ecology & Evolution. Yet, there's a major caveat to this statement: For the vast majority of species, the animals don't live long after they stop reproducing, and menopause appears to be a circumstance related to captivity (such as in the guppies) that occurs only in some individuals, not the entire species.

Also in this select group are some insects, such as the gall-forming social aphid Quadrartus yoshinomiyai, in which adult females have extended post-reproductive livesdefending the colony.

From an evolutionary standpoint, menopause is an apparent oddity, given that you'd expect individuals to want to pass on their genes for as long as possible. So why did it develop at all?

The most prevalent theory behind menopause is called the grandmother hypothesis. In short, it suggests females may stop breeding early to help their children and grandchildren survive and reproduce. This certainly appears true in orca populations, in which older females are repositories of ecological knowledge, especially when it comes to finding food — researchers found mothers increase the survival rate of their adult sons, which have better reproductive success the older they get.

Interestingly, matriarch elephants are also vital in the community, but they don't go through menopause.

The difference here lies in how the groups are made up. Killer whales' sons and daughters stay in the groups in which they were born. So, over time, the mothers become increasingly related to their neighbors, providing a motive to shift from reproducing to helping their descendants, thus further enhancing their genetic legacy. In elephant society, on the other hand, sons leave the birth group, so mothers don't become any more related to their group mates as they age.

Another key aspect of this is competition for resources.

Research in orcas shows that when two generations of killer whales in the same group breed simultaneously, calves from the older generation of females are 1.7 times more likely to die. This is possibly because younger females are focused only on their calves, whereas the older females may raise their own children and those of their adult daughters.

In ancestral humans, daughters would move out to join new families. A daughter would initially have no relation to the group until she had children, but as she got older, she would become increasingly related to her group. Eventually, helping her relatives raise their children would become more genetically beneficial to her, especially since having more children would put her new kids in direct competition for resources with her other descendants.