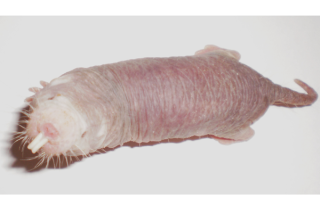 A smiling naked mole-rat reveals some of its unusual features and a face everyone should love.
(Image: © Kaitlyn Lewis)

Rochelle Buffenstein, professor of physiology at the University of Texas Health Science Center at San Antonio; and Thomas Park, professor of biological sciences at the University of Illinois at Chicago are known for discoveries in their fields, including breakthrough insights they learned from observing naked mole-rats. They contributed this article to LiveScience's Expert Voices: Op-Ed & Insights.

We love naked mole-rats because they're goofy-looking, and they have "naked" in their name — although the latter is often a problem, as most emails sent to us with "naked mole-rats" in the subject line automatically land in our junk mail.

Some people look at naked mole-rats (Heterocephalus glaber) and think, "Ugh, gross — a pink sausage with teeth," or worse yet, "a weeny with feet." Indeed, the Internet is filled with gross descriptions not worth repeating, but those are generally comments from people who have only looked at pictures of this not-very-photogenic — but really very cute — critter .

Spend a little time watching these animals, and that attitude soon changes. Like bees, naked mole-rats live in large family groups with a "queen" and a distinct social hierarchy of workers and couch potatoes. They have really quirky behaviors, like smelling each other's faces and bottoms to decide who goes on top and who goes below when passing in a tunnel. Get it wrong, and the more dominant mole-rat will give the young upstart a hard yank on the tail, or head butt it out of the way.

In zoos around the world, you can watch the critters for hours in their plexiglass burrows — which, in so many ways, resemble beehives. You'll laugh when you see how naked mole-rats share so many humanlike behaviors: sleeping on their sides in a huddle with their arms around each other; a determination to eat the same piece of food when there is a lot available; and organizing their burrow homes just the way they want them, with a bathroom, a pantry, a sleeping chamber, often an exercise room and always an isolated toilet chamber. They are one of the cleanest critters known and do all their ablutions in the "toilet," and so do not contaminate their food or sleeping quarters with urine or fecal waste.

But although they are always fun to watch, we mostly love naked mole-rats because they are scientifically very cool. They remind us that studying "weird" or "special" animals is good science and often sheds light on the more difficult biological and biomedical questions that have eluded scientists for years.

For example, why do they live in a hive arrangement? How do they manage to live for 30-plus years? How do they cope with the toxic air of crowded, unventilated burrows? Why are they able to maintain good health well into old age, and why don't they get cancer, heart disease and Alzheimer's? Questions like those have led curious scientists to uncover some of the naked mole-rats' biological secrets, and many of those have challenged old dogmas and forced scientists to consider new directions and scientific ideas.

In the naked mole-rats' crowded, dank environment, gas exchange with the surface is poor, and animals have to contend with low levels of oxygen and high levels of exhaled carbon dioxide and water vapor. Remarkably, naked-mole-rat brains can tolerate low — and even no — oxygen for an amazing 15 to 30 minutes, and if oxygen is restored, the brain manages to function normally as though nothing bad even transpired. How do they do it? They retain a brain characteristic that protects fetuses of all mammals in the low-oxygen environment of a mother's womb.

Another challenge in the burrow is that the moist air becomes saturated with carbon dioxide and becomes acidic. In most other mammals, that acid buildup would burn the nasal passages and eyes. Naked mole-rats are impervious to this acid burn, and recent studies show that this insensitivity is attributed to adaptive changes in the nerve fibers that normally respond to acid pain.

Despite living under conditions that would kill most other mammals, naked mole-rats actually have a tremendously long life expectancy , living about 32 years — almost nine times longer than similar-size mice. Not only can they beat the odds of dying at six years old, as predicted from their body size, but they are able to maintain cancer-free, good health for at least 75 percent of their remarkable long life span.

This retarded decline in function during aging is attributed to a diverse suite of mechanisms in place to maintain the integrity of naked-mole-rat DNA. As a result, these animals are able to better maintain protein structure and the ability to repair damaged proteins, cells and organs. Similarly, those mechanisms have enabled naked mole-rats to avoid getting cancer and likely contributes to their extensive protective arsenal and broad tolerance of just about any stress that comes their way.

So, as you can see, there is a lot to be learned from the awesome, underground-living sand puppy that is directly pertinent to our own lives. As scientists, this is why we really love naked mole-rats!