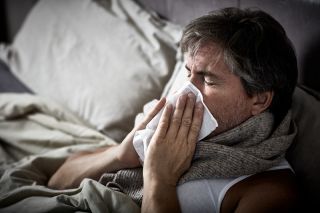 The flu can be a serious illness itself, but it may also increase the risk of having a heart attack, a new study from Canada finds.

The study found that patients' risk of a heart attack was six times higher during the first week following a flu diagnosis, compared with their risk in the year before or the year following being sick with the flu.

The findings highlight the importance of getting a flu shot to prevent the disease, lead study author Dr. Jeff Kwong, a senior scientist at the Institute for Clinical Evaluative Sciences, a nonprofit research organization in Ontario focused on health care issues, said in a statement. "People at risk of heart disease should take precautions to prevent respiratory infections, and especially influenza, through measures including vaccinations and handwashing."

People who are at risk for heart disease can include those with high blood pressure, high cholesterol levels, diabetes or obesity, as well as those who smoke, have a family history of heart disease or are age 65 or older, according to the American Heart Association (AHA). People should see their doctor to help determine their risk of heart disease, according to the National Heart, Lung and Blood Institute. [9 New Ways to Keep Your Heart Healthy]

The study was published today (Jan. 24) in the New England Journal of Medicine.

Previous studies have suggested a link between the flu and heart attacks, but these studies had some important limitations; for example, they did not always confirm that patients had the flu using lab tests, according to the new paper.

In the new study, the researchers analyzed information from nearly 20,000 adults in Ontario who were ages 35 and older and had a laboratory-confirmed flu diagnosis from 2009 to 2014. Of these, 332 patients were hospitalized for a heart attack in the year before, the year after or during their flu infection. About half of these patients had diabetes, 40 percent had high levels of lipids (fats) in the blood and 85 percent had high blood pressure.

"Our findings … support international guidelines that advocate for influenza immunization in those at high risk of a heart attack," Kwong said.

The findings also suggested that the risk of heart attack tied to the flu may be particularly high for those ages 65 and older, and those infected with a type of flu virus called influenza B virus.

There are several ways that having the flu could increase the risk of a heart attack. For example, inflammation caused by the body's immune response to the virus may make the plaque inside blood vessels unstable, which could lead to an artery blockage, according to the Harvard Health Blog. In addition, when a person has the flu, the heart may need to work harder to pump blood through the lungs, which increases the amount of stress on the heart, according to the AHA.

The researchers noted that their study only involved patients whose illness was severe enough to require going to the hospital, and it's not clear whether patients with milder infections would also be at an increased risk for a heart attack.