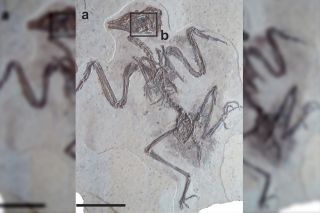 Scientists have discovered a surprisingly "visionary" detail about a dinosaur-age bird that had a tooth-filled beak: It could likely see in color.

An analysis of the 120-million-year-old bird revealed that the creature's eye tissues — more specially, its rods and cones — had fossilized in remarkable condition. (Whereas rods sense grey tones, cones detect colors.)

"We discovered a fossilized bird eye with soft tissue for the first time in the world," said study co-researcher Baochun Zhou, an associate professor of paleontology at the Shanghai Natural History Museum, in China. [Avian Ancestors: Images of Dinosaurs That Learned to Fly]

A local collector in China found the fossilized bird remains in Liaoning Province, a region renowned for its exquisitely preserved fossilized birds. The newfound fossil is no exception: It may be small — about the size of a 5-inch-long (12 centimeters) modern house sparrow (Passer domesticus) — but it's easy to see the ancient bird's elegant neck, long tail and sharp talons, all of which are fully articulated (connected as they were during the bird's life).

The find's most captivating features, however, are the fossilized eye tissues. Like people, birds have cells called rods and cones in the light-sensitive tissue in the backs of their eyes. But unlike humans, birds have oils in their eye tissues that help the animals see in color.

Researchers said they were stunned when a scanning electron microscope revealed that cone cells and differently sized oil droplets were preserved in the fossil. (To be clear, researchers didn't detect any organic tissue. Rather, the bird's soft tissues had been replaced with minerals as they fossilized.)

The oil droplets were similar in size to those seen in living birds. "So, the extinct bird should be a diurnal [active during the day] species, unlike the owl, that had color vision," Zhou told Live Science.

Zhou added that this discovery "indicates that the complex optical system of cone cells had already been achieved by 120 million years ago."

The collector who found the fossil donated it to the Shanghai Natural History Museum about five years ago, where the find is now on display. While the Cretaceous-age creature is a previously unknown species, researchers have yet to give it a formal scientific name, Zhou said.

Even so, the researchers have determined that the bird, found in the Jiufotang Formation, belongs to the enantiornithes, an extinct group of birds. Enantiornithestended to have teeth in their beaks and clawed fingers on their wings, "but otherwise looked much like modern birds externally," Zhou said.

"The most characteristic anatomical feature of enantiornithes is that the articulation of the shoulder bones is the reverse of that of modern birds," Zhou said. The enantiornithes went extinct at the end of the Mesozoic era, about 66 million years ago.