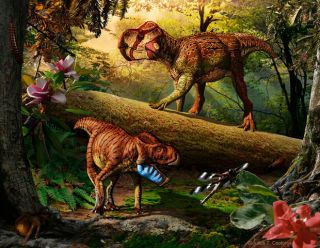 Could these ancestors of Triceratops see the color red?
(Image: © Julius T. Csotonyi)

Dinosaurs likely had a gene that gave them a double win — red coloring and the ability to see the color red, a new study finds.

This so-called "red gene" gives living dinosaur relatives, including birds and turtles, red coloring on their bodies and the ability to see more colors within the red spectrum than people can see, the researchers said.

"Humans can distinguish between some shades of red such as scarlet and crimson. However, birds and turtles can see a host of intermediate reds between these two shades," study senior author Nick Mundy, an evolutionary geneticist at the University of Cambridge, said in a statement. "Our work suggests that dinosaurs would have also had this ability to see a wide spectrum of redness."

The gene, called CYP2J19, allows birds and turtles to convert yellow pigments they eat into red hues on their bodies, shells or beaks. These red pigments can also be used to strengthen their ability to see red  through droplets of red oil in their retinas (the light-sensitive tissue at the back of the eye), the researchers said. [Paleo-Art: Dinosaurs Come to Life in Stunning Illustrations]

Unlike mammals, birds and turtles have retinal cones that contain brightly colored oil droplets, such as green, yellow and red, that help them see those colors, the researchers said. The oil droplets are akin to a color filter on a camera lens. "By filtering the incoming light, the oil droplets lead to greater separation of the range of wavelengths that each cone responds to, creating much better color sensitivity," Mundy said in the statement.

To learn about the evolutionary history of the CYP2J19 gene, the researchers reconstructed a family tree that dated back millions of years, and found that the "red gene" originated about 250 million years ago.

It's also possible that the gene gave some dinosaurs red coloring, but this is more speculative, the researchers said.

Seeing red may have helped dinosaurs pick the best mates, the researchers speculated.

Research on zebra finches, which also hold this red gene, suggests that redder birds are healthier. That's because there may be a link between red beaks and the bird's ability to break down toxins in the body, the researchers said. There is similar evidence among red-eared terrapins (freshwater turtles) suggesting that terrapins with redder ears are healthier than their less-rosy counterparts.

"The excellent red spectrum vision provided by the CYP2J19 gene would help female birds and turtles pick the brightest red males," the study's lead author, Hanlu Twyman, a doctoral student in the Department of Zoology at the University of Cambridge in England, said in the statement. [Wipe Out: History's Most Mysterious Extinctions]

Despite the gene's old age (evolutionarily speaking), only a few types of animals have it. The ancestral lineage that gave rise to the scaly lizards and snakes broke off before the red gene arose. That explains why these reptiles either don't have retinal oil droplets, or have only yellow and green droplets, the researchers said.

Crocodiles split from the common "red" ancestor after turtles did, but they seem to have lost the CYP2J19 gene. Moreover, the CYP2J19 gene arose after the divergence of reptiles and mammals, which explains why humans don't have oil droplets in their eyes today, the researchers wrote in the study, published online today (Aug. 3) in the journal Proceedings of the Royal Society B.