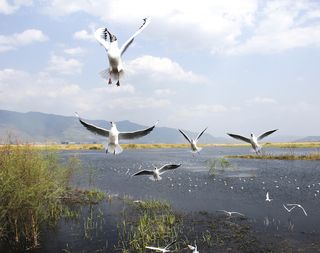 Modern birds — from the soaring eagle to the tiny hummingbird — share a common ancestor that lived about 95 million years ago in South America, a new study finds.

That feathery common ancestor laid the groundwork for its innumerable descendants. When an asteroid hit the Yucatan Peninsula about 66 million years ago, it killed off the nonavian dinosaurs. So-called modern birds in South America survived and rapidly diversified, the researchers said.

These modern South American birds then moved to other parts of the world via land bridges (even fliers need stopovers on land), diversifying during periods of global cooling, the researchers found. [Avian Ancestors: Dinosaurs That Learned to Fly]

In the new study, scientists tried to pin down the date for the most recent common ancestor of modern birds. Other studies have suggested a vast range of dates, from 72 million to 170 million years ago.

"Modern birds are the most diverse group of terrestrial vertebrates in terms of species richness and global distribution, but we still don't fully understand their large-scale evolutionary history," study co-researcher Joel Cracraft, a curator in the Department of Ornithology at the American Museum of Natural History in New York City, said in a statement. (There are more than 10,000 living species of birds, compared to about 5,000 living species of mammals.)

"It's a difficult problem to solve because we have very large gaps in the fossil record," Cracraft added. "This is the first quantitative analysis estimating where birds might have arisen, based on the best phylogenetic [family tree] hypothesis that we have today."

Birds began their evolutionary split from dinosaurs about 150 million years ago, during the Jurassic period. But these early birds had some retro features: Like dinosaurs, they still had teeth; they retained their fingers, some with claws on the end of each digit; and they had long, bony tails (today's birds usually don't have long tails, and those that do sport tails have ones mostly made of feathers, not bone), said Daniel Ksepka, a curator of science at the Bruce Museum in Greenwich, Connecticut, who was not involved in the study.

Cracraft and his colleague used data only from modern birds, or birds without these retro features, said study co-researcher Santiago Claramunt, a research associate in the Department of Ornithology at the American Museum of Natural History. Most of the birds they examined were post-Cretaceous, living after the asteroid hit, he told Live Science.

The researchers used a two-pronged approach in dating the most recent common ancestor. They looked for DNA differences among 230 bird species representative of most avian families, and used the results to construct a family tree that goes back to the most recent common ancestor. Then, they paired that data with the fossil record — 130 fossil birds in all.

The resulting family tree showed that the most recent common ancestor of modern birds lived about 95 million years ago, they said. [Gallery: Brazil's Vanishing Birds]

The team then went a few steps further, examining modern bird migration and the effects of climate on diversification.

During the Cretaceous and early Paleogene periods, South America was connected to Antarctica, Australia and New Zealand. This corridor gave plants and animals the chance to spread until South America and Antarctica separated, sometime between 50 million and 37 million years ago, according to the study.

Another route took modern birds to North America across a Central American land bridge that researchers think existed during the Paleogene, a period lasting from 66 million to about 23 million years ago, Claramunt told Live Science. Once in North America, these birds spread to Asia, Europe and eventually Africa, he said.

"When the Earth cools and dries, fragmentation of tropical forests results in bird populations being isolated," Cracraft said in the statement. "Many times, these small populations will end up going extinct, but fragmentation also provides the opportunity for speciation to occur and for [animal type and count] to expand when environments get warm again. This work provides pervasive evidence that avian evolution has been influenced by plate tectonics and environmental change."

Ksepka called the study "thought provoking and compelling," adding that the 95-million-year-old date "seems quite sensible."

"The idea that birds were hiding out in South America is quite interesting," Ksepka told Live Science. "Future fossil discoveries in South America and Antarctica will really help us test this hypothesis."

The study was published online today (Dec. 11) in the journal Science Advances.