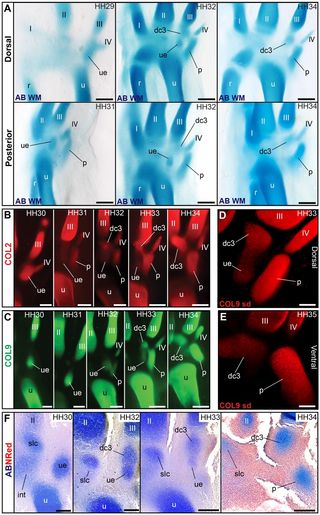 When dinosaurs evolved into birds, they had to adapt their arms into wings in order to take flight — a process that altered their skeletal structure. Now, researchers have found that this process included the rare disappearance and reappearance of a bone.

The pisiform, a crumb of bone that helps keeps birds' wings rigid on the upstroke, had vanished in the birdlike dinosaurs that were modern birds' closest ancestors, the researchers report today (Sept. 30) in the journal PLOS Biology. But birds later evolved to have this bone again as an adaption to flight.

"It is rare," study researcher Alexander Vargas, who leads the ontology and phylogeny lab at the University of Chile in Santiago, told Live Science. "This idea that a bone can disappear and reappear in evolution has been resisted a lot in evolutionary biology."

Of the few accepted cases of such a disappearing trick, the bird pisiform is among the clearest cases, Vargas said. [Image Gallery: Dinosaur Arms to Bird Wings]

Similarities between dinosaur and bird wrists were among the first evidence that paleontologists used to argue that birds are dinosaur descendants. But the evolutionary picture is foggy: Early birdlike dinosaurs had as many as nine wristbones, while modern birds have only four. How nine became four has been a challenging question.

"I compare this to experimental physics," Vargas said. "Accelerating particles versus astronomy, where you just watch the skies — you need both to get a complete theory of physics."

Vargas and his team were the first to bring together the often-contradictory lines of paleontology and developmental biology research on the dinosaur and bird wrists. They scoured museum collections to examine fossils of birdlike dinosaurs; they also conducted traditional examinations of modern bird anatomy. Most importantly, they used a new technique to trace the prenatal development of the wrists of modern birds. By tracing certain proteins linked to the formation of collagen, the protein that makes up connective tissue, the researchers could get a sharper picture of the stages of development. This protein-tracking method allowed them to see, for example, when a bone originated as two separate components that fused, versus forming as a single component.

As a result, Vargas and his colleagues were able to reconstruct the evolution of the bird wrist. They found, for example, that a bone called the radiale by paleontologists and the scapholunare by ornithologists is the same bone and should get a single name in both birds and dinosaurs.

Meanwhile, the semilunate, a half-moon-shaped bone in birds, is the fusion of two carpal (wrist) bones from dinosaurs, the researchers found. Most striking, however, was the little pisiform bone, a tiny bone that develops inside a wrist tendon. In dinosaurs, paleontologists call this wristbone the ulnare, and find that it had disappeared by the time that birdlike dinosaurs, known as theropods, appeared on the scene about 230 million years ago. (T. rex, a famous predator from about 65 million years ago, is an example of a theropod dinosaur.) Birds, however, have the same bone, resurrected.

"It disappeared, and then it came back," Vargas said. The bone is important for animals that walk on four legs, so birdlike dinosaurs probably lost it when they started walking on two legs, he said. Flight made the pisiform important again, and it returned.

Having cataloged and clarified the wrist bones, Vargas and his team have moved on to the evolution from dinosaur ankle to bird ankle. They also plan to use their technique to clarify the evolution of reptile and mammal wrists and ankles.

"They, too, have controversial issues regarding the identity of the wrist and ankle bones," Vargas said. "They seem to be like little puzzles, like a mosaic of bone in there, and they're actually not that easy to identify."