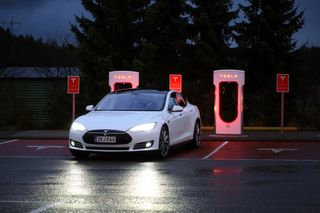 Fans of Tesla electric cars who also have implanted heart devices can rest easy: A new study finds that these patients won't run the risk of shock or interference to their devices when they sit in or stand close to a Tesla while it's charging.

The findings come on the heels of another recent study, which examined how electromagnetic interference (EMI) from electrical cars could possibly affect patients with implanted cardiac devices. For example, that study looked at whether it is possible that the devices, which work by measuring electrical activity in the heart could misinterpret signals from electrical or magnetic objects as a potential sign of distress coming from the patient's heart.

In some preliminary tests in the new study, the researchers determined that the highest EMI was measured while vehicles were being charged. But the patients were not affected by the high EMI emitted from the charging vehicle, according to the study. [Hyperloop, Jetpacks & More: 9 Futuristic Transit Ideas]

This proof-of-concept study suggests that "electric vehicles may be safe to use for individuals with cardiac defibrillators," according to senior study author Dr. Abdul Wase, a clinical professor of medicine at Wright State University's Boonshoft School of Medicine in Ohio, and his team.

In the study, the researchers recruited 26 men and eight women between the ages of 46 and 85 who were patients at Good Samaritan Hospital in Dayton, Ohio. All of the patients had stably functioning cardiac implants. Some of the patients had a single-chamber implant, while others had dual-chamber or biventricular implants, which were made by different manufacturers. (A single- versus dual-chamber implant refers to how many of the heart's four chambers the device works on.)

Using an electromagnetic field meter, the researchers found that the highest EMI was measured close to the charging port and on the floor of the back seat of a 2016 Tesla Model S P90D while the vehicle was being charged at 220 volts, according to the study.

Then, the researchers monitored the patients as they sat in the driver's seat, the passenger seat and the back seat, and as they stood next to the charging port. The researchers also adjusted the sensitivity of the patients' implanted devices to see if they responded to any EMI at their least and most sensitive settings.

The study showed that electromagnetic signals from the vehicle's battery didn't interrupt the normal functionality of the patients' cardiac implants as they switched to different positions in the car or stood at the charging post, regardless of their device's sensitivity settings. The implants weren't affected because the amount of EMI generated by electric vehicles is very small, thus making them safe for people with an implanted cardiac device, according to the study.

The findings were presented today (Nov. 13) at the American Heart Association's Scientific Sessions 2017 in California. They have not yet been published in a peer-reviewed journal.