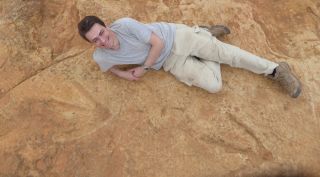 Researcher Fabien Knoll lies next to the newly discovered footprints of a gigantic carnivorous dinosaur found in Lesotho, a country in southern Africa.
(Image: © Courtesy of Fabien Knoll)

About 200 million years ago, a giant meat-eating dinosaur — one so large it was about twice as long as a giraffe is tall — left behind three-toed footprints as it trekked across the muddy ground, according to a new study.

Now, researchers are studying this massive dinosaur's fossilized footprints, as well as the footprints of slightly smaller bipedal dinosaurs that lived during the Jurassic period in what is now Lesotho, a country in southern Africa.

The dinosaur's enormous footprints indicate that its body measured up to 30 feet (9 meters) long, and just under 10 feet (3 m) tall at the hip, the researchers said. That length is four times the size of a lion, the largest modern carnivore in southern Africa, they added. [Images: Denali National Park's Amazing Dinosaur Tracks]

Given its robust size, the dinosaur is likely a megatheropod, the researchers said; this group of giant, two-legged, mostly carnivorous dinosaurs includes other large theropods, such as the fearsome Tyrannosaurus rex. They named the trackway Kayentapus ambrokholohali. (Just as with new animal species, trace fossils, such as trackways, also receive scientific names. The animal itself, however, has yet to receive a scientific name.)

The researchers found the tracks in Lesotho's Maseru district. The surrounding sandstone has ripple marks and "desiccation cracks" on it — signs of a prehistoric watering hole or riverbank, the researchers said.

The latest discovery is "very exciting," study co-researcher Fabien Knoll, a senior research fellow at the University of Manchester in the United Kingdom, said in a statement.

"It is the first evidence of an extremely large meat-eating animal roaming a landscape otherwise dominated by a variety of herbivorous, omnivorous and much smaller carnivorous dinosaurs," Knoll said. "It really would have been [at the] top of the food chain."

It wasn't until much later in the Jurassic and the Cretaceous that larger theropods, such as T. rex, appeared.

"This discovery marks the first occurrence of very large carnivorous dinosaurs in the early Jurassic of southern Gondwana, the prehistoric continent which would later break up and become Africa and other landmasses," lead study researcher Lara Sciscio, a postdoctoral research fellow at the University of Cape Town in South Africa, said in the statement. "Globally, these large tracks are very rare. There is only one other known site similar in age and sized tracks, which is in Poland."

"In fact, there are numerous palaeosurfaces where footprints, and even tail and body impressions of these and other animals, can be found," she said. "But now, we have evidence this region of Africa was also home to a mega-carnivore."

The study was published online Oct. 25 in the journal PLOS ONE.